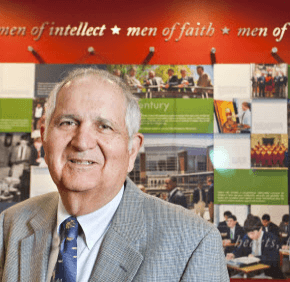 By Elizabeth Lowe
elowe@CatholicReview.org
Twitter: @ReviewLowe
TOWSON – Lou Heidrick began his career as an educator in 1965 at Calvert Hall College High School teaching English composition – and he was nervous.
“I was 21, I was scared to death. I had seniors,” Heidrick said. “I was teaching something I wasn’t prepared for.”
Forty-eight years later, Heidrick, now 69, is retiring at the end of the 2012-13 school year.
“I thought it was a good move for the school,” said Heidrick, Calvert Hall’s principal since 2001. “I thought it was a good time for me personally.”
During his tenure at Calvert Hall, Heidrick has served as chairman of the social studies department, moderator and coach of clubs and teams and assistant principal for academic affairs and student affairs.
“I’ve done a lot of different things and I liked them all,” Heidrick said. “The number one job of a principal is to be present and be supportive. I try to go to everything.”
Joseph Baker, assistant principal for academic affairs at Calvert Hall, said Heidrick has been committed, in different positions, to growing the school.
“He’s very professional, he’s very thoughtful,” Baker explained. “He’s very fair about adjudicating situations.”
As a product of Catholic schools, it is fitting Heidrick opted to spend his career as a Catholic school educator.
He attended School of the Cathedral of Mary Our Queen, now in Homeland; Mount St. Joseph High School in Irvington; and Loyola University Maryland in Baltimore.
“I had great direction in my life from my teachers,” Heidrick said.
As Calvert Hall’s first lay principal, Heidrick “felt a great responsibility to make sure I maintained the Lasallian mission of the school. I was very conscious of that.”
He has completed the Lasallain Leadership Institute and was named a distinguished Lasallain educator in 1990.
“I don’t think I could be principal of a Lasallian school without understanding Lasallian charism,” Heidrick said.
Heidrick has taught advanced placement economics at Calvert Hall as principal and in previous positions. He is considering teaching the subject at the Community College of Baltimore County, where he taught in the evenings for 25 years.
“He is as vibrant and as vital and dedicated today as I think he was when he came here 48 years ago,” said Christian Brother Thomas Zoppo, president of Calvert Hall. “Forty-eight years is an awful long time for anyone.”
A humble and soft-spoken Heidrick is pleased with Calvert Hall’s stable enrollment (there are currently 1,186 students), as well as the school’s academic and fine arts programs and campus facilities.
“We have great people here,” he said. “I’m proud of where the school is today. I would not say they are my accomplishments.”
In retirement, Heidrick plans to travel and relax on his boat.
“I think I’ll find enough to do,” said Heidrick, who will be in good company.
His wife of more than 45 years, Janet, recently retired from her career as a nurse. The couple has two children and five grandchildren.
Doug Heidrick, Lou’s younger son, is a Calvert Hall alumnus and the school’s director of communications.
Charles Stembler, Calvert Hall’s assistant principal for student affairs, has been named principal, effective July 1.
Also see:
Calvert Hall names new principal
Making the college decision
School news from around the archdiocese
Copyright (c) May 9, 2013 CatholicReview.org
PrevNext