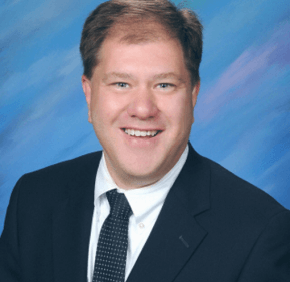 Brother Thomas Zoppo, a Christian Brother and president of Calvert Hall College High School in Towson, announced May 3 that Charles Stembler ‘83, the school’s current assistant principal for student affairs, has been appointed Calvert Hall’s principal effective July 1, 2013.
Stembler will replace Louis Heidrick, who retired after 48 years at Calvert Hall, including the last 12 as principal.
“Chuck Stembler embraces the vision of St. John Baptist de La Salle and our mission of developing Men of Intellect, Men of Faith and Men of Integrity. With our dedicated faculty and staff, he will work collaboratively to make Calvert Hall an even better educational institution as we prepare our students to take their place in today’s world,” Brother Thomas said.
Stembler has served in his current role since June 1990 and has been responsible for supervision, coordination and vision of the student affairs of Calvert Hall including discipline, student activities, fine arts, campus ministry, health, transportation and facilities. He has coordinated the Summer School Program and has overseen school-wide student fund-raising such as the Magazine Drive, which is one of the largest drives on the East Coast.
“I am excited, honored and humbled at this opportunity. Calvert Hall is blessed to have incredibly supportive alumni, a wonderful faculty and staff, and the greatest students. The leadership and mission of the Christian Brothers and the charism of St. John Baptist de La Salle has never been more relevant and I look forward to continuing our tradition of excellence,” Stembler said.
In the classroom, Stembler has taught Advanced Placement American/comparative government, leadership, English and social studies.
After graduating from Calvert Hall in 1983, Stembler earned bachelor’s degrees in economics and political science (Summa Cum Laude) from what is now Loyola University Maryland in 1987 and his master’s degree in educational administration from Loyola in 1993.
His accomplishments at Calvert Hall include Distinguished Lasallian Educator; Br. Gabriel Alumni Award recipient, graduate of the Lasallian Leadership Institute and presenter at the National Conference on School Discipline. He is currently a board member at St. Pius X School (chairman of the Marketing/Niche Committee of the Strategic Plan) and is a past board member at the Monsignor O’Dwyer Retreat House.
Stembler resides in Phoenix with his wife, Kathy, and their children, Chip and Kate.
Also see:
Calvert Hall rallies around hospitalized Calvert Hall student
PrevNext