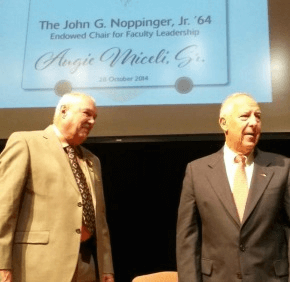 By Paul McMullen
pmcmullen@CatholicReview.org
Twitter@ReviewMcMullen
TOWSON – It was no coincidence that when it came time for John G. Noppinger to give back to Calvert Hall College High School, which reinforced the time-honored values first instilled by his parents, he chose to honor a teacher who defines “old school.”
Calvert Hall announced Oct. 28 a gift of more than $1.5 million from Noppinger, class of 1964. He entered the school as a freshman in 1960, the same year its faculty newcomers included Augie Miceli.
Noppinger’s legacy will be the development of an open commons for students and the community that will bear his name, and the first endowed faculty chair at the school, with Miceli being its first recipient.
Noppinger didn’t take a math class from Miceli at Calvert Hall, or play football there, which the latter coached, but nonetheless admires him.
“I knew he was a great coach, and a tremendous math teacher who was totally dedicated to the school, as you can tell from his 54 years and counting,” Noppinger said. “When I decided to endow a chair, it was with him in mind as the first recipient, for all the right reasons.”
As principal Chuck Stembler announced the particulars of the endowed chair during a morning assembly in McManus Theater, he walked toward Miceli, who sat with his homeroom class.
The resultant outpouring of affection and applause led the 82-year-old to dab a handkerchief to his eyes.
Invited guests included his wife, Angela, and son, Augie Jr., Calvert Hall class of 1982. Miceli and his wife are longtime parishioners of St. Ursula in Parkville.
Noppinger attended the parish school at the Church of the Immaculate Conception in Towson before entering Calvert Hall. Plans to enter college never materialized, but his high school business studies served him well, as did lessons he learned from his late father, an attorney and CPA.
Noppinger applied himself in the construction and oil industries, in Houston and the Middle East, where he told students that he worked “18 hours a day, seven days a week.”
He eventually returned to Baltimore to care for his ailing parents, and in November 2013 established a scholarship for deserving students at his alma mater, which he said strengthened in him the “faith, intellect and integrity” that are its mission.
“In most parts of the country,” he said, “people ask, ‘Where did you go to college?’ In Baltimore, they ask, ‘Where did go to high school?’ When it came time for me to give back, the choice was way too obvious, Calvert Hall.”
Also see:
Turkey Bowl: Miceli, Brune still giving to Catholic education
School news: New athletic and tennis facilities, an anti-drug policy and more
Creativity and caring defined NDP senior, not cancer that took her life
PrevNext