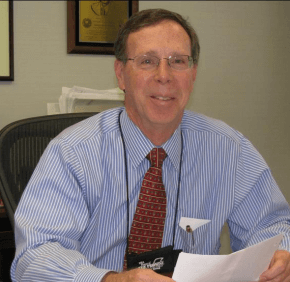 Dennis Smith has been director of the Veterans Affairs Maryland Health Care System for nearly 17 years, a long time to hold a major leadership position in such a changing, challenging and complex field.

“It (Calvert Hall) taught me about leadership, how to be a leader,” Smith said. “It really instilled in me the idea that I wanted to be a leader, to make something of myself and to make a difference. The school was really good in that regard and the attitude was that how far you go in life is up to you.”

Brought up in a strong Catholic family and educated at the Immaculate Heart of Mary School in Baynesville before entering Calvert Hall at its then brand new location on La Salle Road near Towson, Smith’s career and family life were accompanied, supported and energized by his Catholic faith.

“It gave me a strong sense of the value and dignity of human beings which I hope I have been able to display and affirm in my role with the VA,” he explained.

His commitment to serving the health care needs of some 52,000 veterans each year has demonstrated impressive results.

“Smith has positioned the health care system to be a leader in veterans’ health care, research and education,” noted the complimentary wording on the American College of Healthcare Executives’ prestigious “Regent Award,” which he received in April 2011.

The award recognized Smith as a leader dedicated to cultivating health care professionals by developing an active affiliation with the University of Maryland School of Medicine and other local colleges and universities.

“Thanks to this commitment, more than 1,100 residents, interns and students from various medical and allied health disciplines are trained throughout the VA Maryland Health Care System each year,” the award noted.

Although he is grateful for such recognition, Smith prefers, he said, to emphasize his commitment to a less heralded area of concern, the homeless.

“The VA system has a special emphasis on the homeless,” he explained. “We have lots of facilities and programs including a 200-bed shelter for homeless veterans.”

Homelessness is a growing problem among veterans returning from Iraq, Afghanistan and other areas of U.S. military involvement, Smith noted. “We’re looking at mental health issues and substance abuse, among other issues, and it’s a real challenge,” Smith said. “We have to reach out to them, help make them feel secure and deal with whatever issues they have, including helping them to get jobs and places to live or they’re going back on the street. They need a continuum of care.”

Smith is proud of what he calls his “marvelous” staff at the VA health system and a working environment that has earned the facility “best place to work” recognition from Baltimore Magazine and the Baltimore Business Journal.

While he is of retirement age, Smith said he has no intention of doing so yet.

“The VA has been such a large part of my life and I’m not ready to give it up,” he said. “I really enjoy what I do and this is such a wonderful place to work.”

In this, he said, he has the support of his wife of 41 years, Elaine, his three children and six grandchildren.