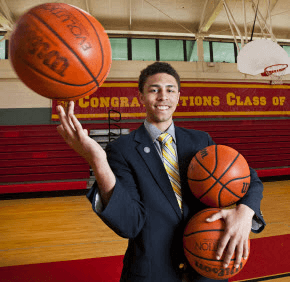 By Elizabeth Lowe
elowe@CatholicReview.org
Twitter: @ReviewLowe
TOWSON – Darryle Edwards II encountered a major hurdle in his basketball career during his sophomore year at Calvert Hall College High School.
After playing junior varsity his freshman year, Edwards moved to varsity his sophomore year for the 2010-11 season. Around the start of the season, he was diagnosed with hypertrophic cardiomyopathy, a heart condition that kept him from playing.
“I couldn’t play competitive sports and I didn’t know what to do,” said Edwards, 18, who graduated June 1. “At first, it was a detachment from the team. I can still play, but not competitively. I’m still a basketball player.”
As a way to deal with the diagnosis, Edwards, who worships at St. Ursula in Parkville, became involved with campus ministry his junior year.
As a peer minister, he helped lead retreats and discussed his faith journey.
“I was going through a tough time,” said Edwards, who noted he felt “a loss of who I was. I thought it (campus ministry) would be a good way to cope. It helped me talk about what I was going through.”
Marc Parisi, director of campus ministry at Calvert Hall, said Edwards is a natural leader.
As the young man’s faith grew, so did his involvement with the basketball team. Edwards couldn’t play, but he attended practices and helped the team – doing everything from getting water for his teammates to calling plays from the bench.
Edwards described himself as a source of “strong emotional support for the team.”
“It easily could have gone the other way,” he said. “That’s another reason it’s an easier transition – because of the faith I have.”
John Bauersfeld, Calvert Hall’s varsity basketball coach, called Edwards a “tremendous player, the best in the school.”
“Post diagnosis, he was a really positive influence for the team,” Bauersfeld said. “In front of them he never hung his head. He’s just a great example of having something you love taken away from you and finding another way to be successful.”
Edwards’ brother, Drew, a sophomore at Calvert Hall who plays varsity basketball, called his sibling the team’s number one fan.
“He focused on supporting us and I love it,” Drew Edwards said. “He’s my older brother and I look up to him.”
They are the second generation of their family to grace the basketball court at Calvert Hall, as their father, Darryle Edwards, led the Cardinals to national prominence in the early 1980s, then starred at Mount St. Mary’s University in Emmitsburg. A member of the Hall of Fame for both the Mount and the Baltimore Catholic League, he coached at Calvert Hall.
Darryle Edwards II’s involvement at Calvert Hall included being a member of the school’s ethnic, Irish and green (recycling) clubs.
“I like to be involved, to get the most out of Calvert Hall and experience what they have to offer,” said Edwards, who graduated with a 4.0 GPA, took honors and advanced placement classes and was a member of the National and Spanish National Honor societies.
Edwards will attend the University of Maryland, College Park’s honors college in the fall. He plans to major in communications.
“I have to see where that takes me,” he said.
Read about more 2013 stand-out grads here.
Copyright (c) June 14, 2013 CatholicReview.org
PrevNext