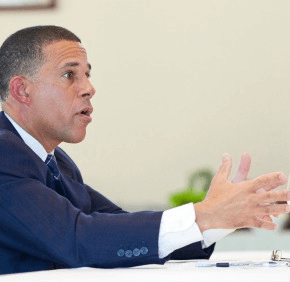 By Maria Wiering
mwiering@CatholicReview.org
ANNAPOLIS – “Jobs, jobs and jobs,” answered Lt. Gov. Anthony G. Brown when asked his administration’s focus, should he be elected Maryland’s next governor.
“The No. 1 goal of the Brown-Ulman administration is to position Maryland’s business climate to be the most competitive in the country,” said the Democratic candidate. “There’s no social program that can effectively compete with a good, family-supporting job.”
Brown answered questions about jobs and education, but also a range of social issues in a wide-ranging Sept. 26 interview with the state’s Catholic bishops and Maryland Catholic Conference board members. Serving with Gov. Martin J. O’Malley as Maryland’s second-in-command since 2007, Brown touted the current administration’s record of expanding services for people in need, and he promised to continue to help vulnerable populations if elected. Brown pledged support for financial assistance for nonpublic schools, but said his first education funding priority was the state’s public schools. Extra funding, he said, would be challenging, as the next governor inherits a $400 million structural deficit.
On respect for life issues, Brown said he opposed efforts to mandate abortion statistic reporting, but would also not work to overturn the state’s ban on physician assisted-suicide.

Nonpublic education
In the past, Brown has supported a tax credit for businesses that contribute to an organization that provides funding for public and nonpublic schools, but, he said, “as governor I don’t want to reopen BOAST” – as the tax credit has been known – because it has not gained traction in the Legislature. Instead, he supports finding new avenues for nonpublic school funding.
He would continue to support state funding for nonpublic schools’ textbook and technology program, as well as the aging schools program, and would “look for ways to increase funding in those areas.”
Brown also supports Catholic schools’ involvement in the state’s expanding pre-kindergarten program for low-income families, he said, saying there should be “no obstacles” to it. Some Catholic programs have experienced challenges in participating, the MCC said. He expects to expand the program’s immediate expansion with gambling revenues.
Family life and safety-net funding
Job creation was Brown’s response to supporting marriages and families. He said is proud of the administration’s current efforts to support foster care and adoption services. Partnerships between the government and churches are important for family support because of the church’s central role in people’s lives, Brown said.
Immigration
Brown said he will continue the administration’s current position to welcome unaccompanied immigrant minors to “take care of children.” He would ask the federal government to reimburse the state for expenses related to helping these children.
Providing services to immigrants is part of serving vulnerable populations, he said.
Brown also supports clarifying the state’s enforcement of federal immigration policies, which vary across jurisdiction. He agrees with the MCC that nonviolent, but undocumented, immigrant offenders should not be a priority for detaining or deportation.
Employment
Brown supports the Sick and Safe Leave Act, which requires employers to provide paid leave within certain parameters. He also supports continuing working with programs that offer job training, such as Our Daily Bread Employment Center, a Catholic Charities program in Baltimore. He would like to make additional investments in technology education in high schools.
Brown would also like to improve workforce reentry for past offenders, and listed among his policy ideas a preference in government-vendor procurement for businesses who hire non-violent ex-offenders.
As governor, he would also focus on small business needs, including tax relief, but would not extend tax breaks to big corporations, because he said that would increase income inequality.
Health care
The MCC is concerned about the 14 percent of Marylanders who remain uninsured. Brown led Maryland’s rollout of the Affordable Care Act, and said he wished the federal health care law also extended health insurance to immigrants in the county illegally. He said he would work to find avenues to health care, including dental and behavioral health services, for the uninsured, through expanded safety-net funding.
Religious freedom
Brown said he would, if elected, ensure legal protections for religious institutions.
“I recognize that religious institutions are more than the church” and include charities and hospitals, he said.
Respect for life
Some studies show Maryland having one of the highest abortion rates in the country, but it is one of four states that do not report abortion data to the Centers for Disease Control. Brown, who is pro-choice, said he does not support changing that policy.
“I’m fearful of how that data would fuel the debate around the question of abortion in Maryland,” he said.
When pressed on his answer, he said, “If you believe, and I do, that a woman has a fundamental right to make reproductive health choices, including abortion, then those numbers shouldn’t matter.”
Instead, he said, he supports “identifying the best practices that promote family, and support women making choices that they want to make,” as well as promoting adoption and reducing domestic violence.
Although Brown voted against the state’s ban on physicians-assisted suicide as a legislator, he said he does not see a reason to overturn the ban “absent a compelling reason.” The issue is not on his administration’s agenda, he added.
To read more political news stories in the Catholic Review, click here.
Also see:
Red or blue, Maryland’s next governor will be Catholic
Larry Hogan, passionate about job creation, welcomes church input
Feeling Blue: Three Catholic schools celebrate national recognition
Gala celebrates education, $140 million in capital campaign
‘Absolutely striking’: St. Margaret completes church renovations
PrevNext