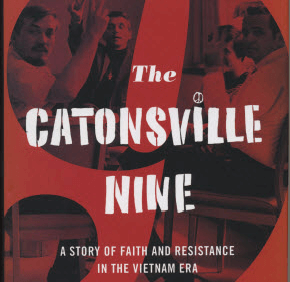 Vietnam War protesters, a halfway house for women and national and international politics are the subjects of books published this year that have a link to the Archdiocese of Baltimore.

The author, a former parishioner of St. Agnes in Catonsville, recounts her Italian heritage and the values her ancestors brought to several local businesses. Publicity materials note that “It is a story of bravery and determination to make a life in Baltimore in the early 1900s, not knowing the language or the customs of American life.”

Curran traces the gradual shift in power in the American Catholic Church from Maryland to New York in this thoroughly researched academic book. As the Premier See and first diocese in the U.S., the Archdiocese of Baltimore was home to three 19th century plenary councils, including one that would lead to the creation of the Baltimore Catechism. Yet, the New York archdiocese, with its growing population and financial resources, gradually became more influential. Curran’s book touches on everything from slavery and economic justice to popular interest in the miraculous.

Journeys of Recovery and Transformation

This soft-cover coffee table book celebrates the 30th anniversary of Marian House, a transitional home in northeast Baltimore for homeless women that was founded in 1982 by the School Sisters of Notre Dame and the Religious Sisters of Mercy. It offers 30 success stories, using the words of former clients, who overcame addiction or homelessness to hold down jobs such as addiction counselor, electrician and hair stylist.

Born into the Fellowship of Alcoholics Anonymous

A 1973 graduate of Seton High School and resident of Hendersonville, N.C., since 1995, the author recounts the circle that helped her father stay sober and her parents’ commitment to Alcoholics Anonymous and Al-anon for more than four decades. Publicity materials refer to the book as a “heartfelt, candid account of the role addiction and sobriety has on both the alcoholic and their family.”

My American Struggle for Justice in Northern Ireland

Redemptorist Father Sean McManus outlines the struggle for justice in Northern Ireland in the newly released American edition of his memoires – offering personal accounts of growing up and undergoing religious formation in Ireland, as well as his intensive lobbying efforts on Capitol Hill on behalf of peace and justice in Northern Ireland. Father McManus, Irish National Caucus President, was based at Sacred Heart of Jesus in Highlandtown from 1973 to 1975, where he was involved in youth ministry and parish work.

When I Was In Haiti

Stories of Hope from Travelers

More than 40 adults and students share stories and photos reflecting their visits to Haiti Deacon Rodridgue Mortel, the director of the Missions Office for the Archdiocese of Baltimore and the driving force behind two schools in his hometown of St. Marc and a trade school to the north.

The Province of Joy

Before becoming a poet and professor at Fordham University, O’Donnell lived with her husband and their three sons in northeast Baltimore and was a professor at Loyola University Maryland. Jesuit Father James Martin calls her most recent book, which mixes the words of the late, great Catholic writer from Georgia with daily prayers and readings, “a prayer book that is old and new, timely and timeless, comforting and provocative.”

A Story of Faith and Resistance in the Vietnam Era

Not long after nine Catholic clergy and laymen broke into a Catonsville draft board on May 17, 1968, to seize and burn draft notices in a well-staged protest of “American imperialism,” the Catholic Review joined a chorus of voices opposing the radical demonstration.

“Employing technological advantages and publicity techniques not available to old-fashioned burners of effigies and witches,” the paper contended, “… they have obscured the vital issues of peace and poverty in a great cloud of smoke.”

Others were inspired by the activists’ brazen actions, staging similar demonstrations across the country. Jesuit Father Robert Drinan, a Boston College law professor, wrote that the destruction of the draft files might be a “dramatic ‘homily’ against the evils of militarism.” He called the action of the Catonsville Nine a “prophetic witness” for peace.

Those conflicting responses are among just a small sample of many that are thoroughly outlined in Peters’ book.

A Catonsville native who has been fascinated by the Catonsville demonstration since his youth, Peters offers a well-researched, well-told and gripping account of the incident and its aftermath – exploring the personalities in a way that other accounts have not.