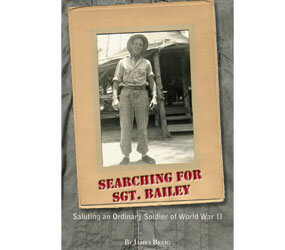 Most Americans of a certain age are familiar with the highly publicized, remarkable heroism of Audie Murphy and the battle glory flamboyance of Gen. George Patton among many other larger than life figures of World War II.

But what about those millions of so called “ordinary” men and women who made victory possible?

Their stories – often extraordinary – have largely remained untold possibly because most of those who experienced the war in one way or another didn’t think their stories worth telling or, more likely, that they quite simply didn’t want to share them.

Veteran journalist and history writer James Breig jolts our fast-fading collective memory of those who fought or didn’t fight in that colossal and terrible war in “Searching for Sgt. Bailey:Saluting an Ordinary Soldier of World War II.”

It is the story of James Boisseau Bailey, from the little-known, sleepy Southern hamlet of Prince George Courthouse, Va., who served in far off New Guinea doing dutifully what he was asked to do and for which he, like most of his comrades, received little acclaim when he returned home.

And it is the story, reminiscent of the Southern atmosphere of Harper Lee’s “To Kill a Mockingbird,” of Sgt. Bailey’s Virginia home and family in those years when talk of the war still implied the Civil War.

Breig stumbled upon Sgt. Bailey’s life while browsing through an antique store in Gloucester County, Va., as he and his wife were on their way to Colonial Williamsburg. He spotted a stack of half-size pages resting in a china bowl. Intrigued, he discovered they were a WWII soldier’s “V-mail” letters sent to his home from overseas.

And thus began Breig’s fascinating and all-absorbing search for Sgt. Bailey. What he thought at first would make an interesting article became, three years later, a 300-page book that resurrects the personal and wartime experiences of this “ordinary” soldier in a way that is both riveting and poignant.

Within the context of Sgt. Bailey’s experiences, his thoughts, fears, hopes, and even anger, Breig also tells a broader story, which he gathered from hundreds of letters home from Marines, sailors, WACs and soldiers and from personal interviews with WWII veterans and experts on the history of war.

In an age when it seems that only the extraordinary can capture our attention, “Searching for Sgt. Bailey” reminds us that the “ordinary” can be so much more than we might imagine and were it not for what lies dormant under that characterization, WWII could not have been fought and won.

In fact, Breig’s story wakes us up to pay attention to this ordinary man and his life and to all the others who did their duty so that we might remain free.

In an Aug. 8, 1944 letter to “Dearest Mama,” Sgt. Bailey writes: “I know that you have begun to think that I have forgotten you but this will never happen.”

For those of us fortunate enough to read and truly savor Breig’s book we will not now forget Sgt. Bailey and all those other “ordinary” men and women to whom we owe so much.

On the dedication page, Breig quotes from Arthur Miller’s “Death of a Salesman”: “He’s not allowed to fall in his grave like an old dog. Attention, attention must finally be paid to such a person.”