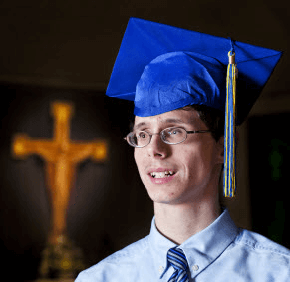 ESSEX – J.T. Dulany has been pinned down more times than he can remember.

Competing mostly in the 103-pound weight class throughout his four years at Our Lady of Mount Carmel High School in Essex, the 19-year-old varsity wrestler said it took opponents an average of one minute to press his shoulders to the mat.

“My strategy was to pray to God that they didn’t beat me up that bad,” Dulany remembered with a laugh.

His joke belied a fighting spirit.

Legally blind since his premature birth, Dulany underwent seven eye surgeries before he was 2. He has a mild form of autism known as Asperger’s syndrome and had to face the death of his mother in 2006 to kidney failure.

The challenges have only made Dulany stronger.

With a 4.4 senior GPA and a cumulative 4.19 GPA, Dulany delivered the valedictorian address at his June 1 graduation ceremony.

“I feel like I have to overcompensate by being the best I can in anything and everything I try,” said Dulany, his hand thumping a table for emphasis during an interview at his high school. “If I had a nickel for every time I was frustrated, I’d be rich. I didn’t give up. I never give up.”

Throughout his wrestling career, Dulany made use of special rules for people with visual impairments that allow for constant touch with his opponents. He lost every match he fought – except for one in his junior year against an Edgewood High School student that became the stuff of legend at Mount Carmel.

Mike Naunton, Mount Carmel’s athletic director, remembered that after the match’s first period, Dulany scored a few points. It began to look like the long-suffering wrestler might actually win.

“In the second round, you could just feel people coming into the gym from other places because word was spreading,” Naunton said. “In that third period, everyone was just on the edge of their seat.”

When the referee finally signaled that Dulany was the victor, the student couldn’t see the scoreboard. He asked who won, and the official responded, “You did, buddy.”

Fans burst into joy, a scene fit for the silver screen.

“We’ve had bigger crowds for basketball games,” Naunton recalled, “but the emotion and the intensity and the loudness on that day was just amazing.”

Grant Taylor, a 17-year-old junior and captain of the wrestling team, remembered jumping up and down over his friend’s only victory.

“I almost cried because it was just so great,” Taylor said.

Dulany’s enthusiasm is reflected in everything he does, Taylor said.

“He’s the man,” Taylor asserted. “At our prom, he’s the only one who danced. He was breakdancing and everything. He tries his best and puts his heart into everything.”

Naunton said Dulany’s peers support him. When Dulany tried out for junior varsity soccer, the other athletes zoomed past him on a timed run. Left behind and unable to see the route the other students had taken, Dulany got lost.

“The varsity team was practicing in another section and they saw that he was lost,” said Naunton, noting that Dulany played JV soccer for two years. “Two of the varsity guys went over and finished the run with him.”

Dulany, whose full name is “James Theodore,” was recognized as one of the Archdiocese of Baltimore’s Distinctive Scholars. He’s been active as the treasurer of his school’s National Honor Society and a representative in the Student Government Association.

Asked what motivated him, Dulany said he wanted to make history at Mount Carmel. Being one of the first four-year wrestlers in the school’s existence was his way of doing it. Faith gets him through the struggles of his life, said the parishioner of St. Michael the Archangel, Overlea.

“I have a cross in my bedroom that I can look at,” he said. “I know that Jesus suffered a lot more than I ever have.”

Dulany has a special devotion to the Blessed Virgin Mary.

“I was always taught that I had two mothers – my mother on earth and Mary,” he explained. “I kind of used that to help me when I needed it.”

Connie Flagg, one of Dulany’s favorite teachers, said Dulany is one of the most memorable students she has ever taught.

“His dedication to his studies and his work ethic are phenomenal,” she said. “He has boundless energy and boundless intelligence. He also has a lot of love in that heart.”

Dulany’s father, Sean, said his son is a role model – demonstrating that “regardless of your limitations, if you put your mind to it, you can do it.”

Dulany will attend Loyola University Maryland in the fall, majoring in political science with plans of going on to law school. He knows his father is proud of his accomplishments – and his mother is, too.

“I’m pretty sure when you go up to heaven, my mom would be shunned from the angels because she’s already bragging so much,” Dulany said.