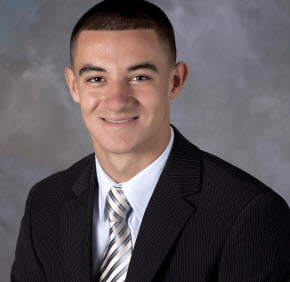 By Elizabeth Lowe
elowe@CatholicReview.org
Twitter: @ReviewLowe
As a four-sport athlete, William Conroy understands the importance of prioritizing schoolwork.
On weekends, the Bishop Walsh School senior , who runs track and plays varsity football, basketball and right field for the baseball team, gets ahead on his homework.
“If I have a test, I stay up later (to study) and lack sleep sometimes,” said Conroy, who has a 3.4 GPA and takes advanced placement and honors courses. “Sports have helped me work hard in school.”
“He always gives 110 percent,” said Bob Boyle, Conroy’s basketball coach of five years. “I’ve been coaching for close to 40 years and Billy’s one of the most enjoyable kids I’ve ever coached. As soon as the season was over this year, he sent me a thank you card for all the years I’ve coached him. That’s the type of person Billy is.”
New to the Spartans’ track team this year, Conroy and his teammates improved the school record in the 400-meter relay to 45.96 seconds.
“He is willing to do anything to help the team,” said Jim Zamagias, athletic director at the Cumberland school and Conroy’s advanced placement political science teacher. “He is very dedicated to any endeavor. If everyone played with his intensity, we would never lose.”
In addition to athletics, Conroy is a percussionist in the school’s band and a member of the chess and public address clubs, making school-wide morning announcements.
In the fall, the 18-year-old will continue his education at The Catholic University of America in Washington, D.C., where his dream of playing collegiate football will become a reality.
“It’s incredible,” he said. “I never thought I would have an opportunity.”
“I’m glad I attended a Catholic school,” Conroy said, “and I would never change it. It’s been great for me and I’ve learned a lot. It’s prepared me for life academically and athletically. Going to a Catholic school and being around other Catholics has helped me become closer to God.”
Conroy, who received an academic scholarship to CUA, plans to major in business management and hopes to one day manage a sporting goods store.
A Boy Scout, Conroy became an Eagle Scout as a sophomore. For his Eagle Scout project, he refinished seven outdoor benches at his parish, Our Lady of the Mountains in Cumberland, where he is a sacristan.
The summers after his freshman and sophomore years, Conroy traveled with classmates to Kentucky and Massachusetts to volunteer for a week through Catholic Heart Workcamp, whose volunteers revitalize communities and beautify homes for the disabled, elderly and impoverished.
“It was one of the best experiences of my life,” Conroy said. “It was just a great feeling and I became very close to God.”
In November 2011, Conroy attended the National Catholic Youth Conference in Indianapolis.
“There were 25,000 kids there,” he said. “(Communion) took 20 minutes – it was incredible.”
William Conroy
Bishop Walsh School
Senior
Credentials: Parishioner of Our Lady of the Mountains in Cumberland, sacristan; runs track and plays varsity football, basketball and baseball; will attend The Catholic University of America
See more student athlete profiles:
Catholic High sophomore’s involvement keeps her on her toes
Cristo Rey senior grows in faith
St. Frances Academy junior running full steam ahead
St. Mary’s senior shares his faith
Mercy senior makes waves overseas
IND senior is committed to service
Mount St. Joseph senior is a team player
Mount Carmel senior is a faith leader
Goretti senior keeps involved
Quick turnaround for Spalding senior
Loyola junior sets example for peers
Seton Keough senior takes the cake
Calvert Hall’s Grace upholds family name
Copyright (c) May 2, 2013 CatholicReview.org
PrevNext