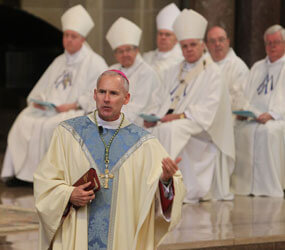 In a 1941 address to Congress at the outset of World War II, President Franklin D. Roosevelt envisioned a future founded on four essential freedoms: freedom of speech, freedom of worship, freedom from want and freedom from fear.

Bishop F. Richard Spencer, auxiliary bishop for the Archdiocese for U.S. Military Services, believes there is another essential freedom that must be added to that list: freedom from evil.

“Evil still touches and permeates our world,” Bishop Spencer said, “and it frustrates all our other freedoms. You and I stand in the middle of God’s will to proclaim and to live that freedom. It requires challenge. It requires self sacrifice. It requires risk.”

Bishop Spencer spoke during a Nov. 11 liturgy at St. Mary’s Seminary and University in Roland Park, where the Alabama native trained for the priesthood.

Observed on Veteran’s Day, the Mass also called to mind the self sacrifice of men and women of the U.S. military forces.

Bishop Spencer is a former pastor of the Western Maryland parish of St. Peter in Oakland. He is also a former associate pastor of Sacred Heart in Glyndon and director of the Monsignor O’Dwyer Retreat House in Sparks.

In his homily, Bishop Spencer recalled April 9, 2004 – one of the bloodiest days of the Iraq War. Then serving as a U.S. Army chaplain, Bishop Spencer remembered ministering to the injured and dying following an insurgent attack on a military convey during Holy Week.

Shaken by what he witnessed, Bishop Spencer later visited with Father Timothy Vakoc, a fellow military chaplain in Iraq. He asked Father Vakoc how the kingdom of God can be in their midst when there is so much chaos and sin surrounding them.

Just two weeks after their meeting, Father Vakoc lost an eye and sustained brain damage when a roadside bomb exploded near his Humvee on May 29, 2004.

“Yes, there are risks yet to be taken in today’s world,” Bishop Spencer said. “You and I must not throw away our freedoms. We must work toward the reality and the fulfillment of those freedoms.”

Bishop Spencer enjoined Christians to be unafraid of the sacrifices that may be required of them. He noted that Nov. 11 is the Feast of St. Martin of Tours, a former soldier who committed himself to Christ at age 18 and later became a bishop.

“We are called to pick up the banner of Christ’s love, Christ’s reconciliation,” he said, “and today, we pause to remember the men and women in uniform who are standing there much as St. Martin did to commit ourselves to a higher calling, to higher values.”

Following the Mass, Bishop Spencer had lunch with his brother priests, seminarians and guests – many of whom congratulated him on his appointment as bishop.

“He is someone we have journeyed with and have known,” said Father J. Kevin Farmer, associate pastor of Holy Trinity, Church of the Crucifixion and Church of the Good Shepherd in Glen Burnie.

Bishop Spencer was especially supportive last year, when Father Farmer was experiencing post-traumatic stress syndrome following a murder-suicide involving some of his parishioners of the Holy Family Catholic Community in Middletown, where he was pastor.

“It was something he was very familiar with,” Father Farmer said. “I was very grateful to him.”

“He’s a good man,” Father Witthauer said. “Everyone is pleased with his selection.”