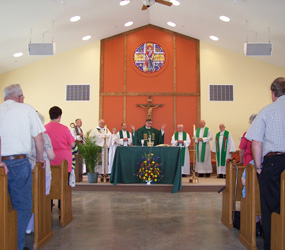 Christ famously went to the shore to call St. Peter and others to be his disciples. A Western Maryland parish named in the famous fisherman’s honor has been doing the same thing at Deep Creek Lake for 17 years even though it had no home to call its own.

That all changed June 28 when Auxiliary Bishop Mitchell T. Rozanski blessed the new $1.2 million St. Peter at the Lake Center.

Located in McHenry just minutes from the 4,000-acre lake in southern Garrett County, the long-awaited house of worship is operated by St. Peter the Apostle in Oakland and designed to accommodate the many vacationers who visit Deep Creek Lake and the Western Maryland mountains every week.

Before the new structure was completed, the parish celebrated weekly Masses outdoors by the lake when the weather was nice – sometimes attracting more than 1,000 people. When it rained, the Masses were moved to the basement of the nearby Honi-Honi Bar. During the winter, Masses were celebrated at McHenry Methodist Church.

With the opening of the new building, the Masses at the other locations are history. Masses will be celebrated during the summer at St. Peter at the Lake at 4 p.m. on Saturday and 11 a.m. on Sunday. The 11 a.m. Mass will be dropped during the winter.

“It’s going to be so nice to finally have our own building,” said Father Donald Parson, pastor. “We won’t have to cart altars around and set up the sound system anymore. It will all be there.”

Designed by Eades Architects of Cumberland and built by Harbel Construction Company of Cumberland, the new church seats about 300 and has sliding doors that open to outdoor patios that can accommodate another 600 people.

Located a mile off of U.S. Route 219, St. Peter at the Lake offers spectacular views of the mountains of Western Maryland. It rests on 14.5 acres of a former pasture.

“The mountains go up to 3,000 feet,” Father Parson said. “Everywhere you look is just beautiful. You have to pinch yourself to believe it.”

St. Peter at the Lake features a stained glass window of St. Peter casting his fishing net. It was furnished with a crucifix, pulpit and other items that were obtained from closed parishes in the Diocese of Allentown, Penn. Woodwork taken from the closed chapel operated by the Holy Cross Fathers also adorns the new building.

St. Peter the Apostle, the westernmost parish in the Archdiocese of Baltimore, has about 490 registered families.