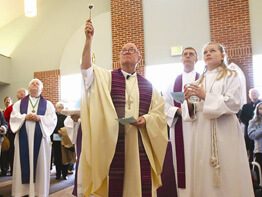 The space that once served as the second church for St. Joseph in Sykesville has been transformed into an office complex to meet the administrative needs of a fast-growing parish of more than 3,000 registered families.

Bishop W. Francis Malooly, western vicar, blessed and dedicated the Chaminade Parish Center following a March 18 liturgy. The center is named after Blessed William Joseph Chaminade, the founder of the Marianist order of priests and brothers who have staffed the parish since 1981.

The former church building, located in Eldersburg, was built in 1965 after the parish outgrew its small country chapel in Sykesville that dates to the mid 19th century. The center stands beside the current church, which was dedicated in 1998 and is the third in the parish’s history.

The new parish center provides more than 15,000 square feet of office space, featuring 25 offices including a large conference room, a small library, a kitchenette and meeting space for the St. Vincent de Paul Society. Taking up one floor, the center also uses a converted choir loft for a second, smaller conference room.

Parish offices had previously been cramped into a basement adjacent to the former church.

“Everyone likes it very much,” said Father Terry Weik, S.M., pastor. “It frees up a lot of space for religious education and youth ministry.”

Father Weik said he professed his first vows as a Marianist inside the new parish center when it was a church.

“Looking at it now, you would never know it was a church,” he said, noting that Rubeling and Associates, Frederick, was the architect and Select Building of Frederick was the builder for the renovation effort. “The whole interior has been completely redone.”

The parish conducted a capital campaign to pay for the $1.2 million renovation project, the pastor said.

“It couldn’t have happened without the parishioners’ generosity,” said Father Weik. “They’ve been very supportive.”

Within the next decade, the pastor said the parish hopes to erect a new building on a field near the church as the burgeoning religious education and youth ministry programs continue to grow.

“It’s a long-range plan,” he said with a laugh. “We haven’t started yet. We’re going to catch our breath first (from this last project.)”