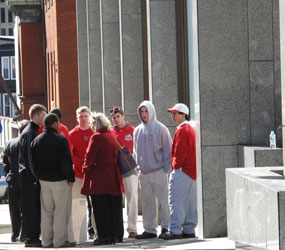 A day after finding out their school would be one of 13 consolidating in June, about 150 students and supporters of The Cardinal Gibbons School showed their spirit March 4 outside the Catholic Center, the Archdiocese of Baltimore headquarters.

Cardinal Gibbons and nine of the 12 elementary schools that will be consolidated are in Baltimore City, in the Neumann Vicariate, which Bishop Madden oversees.

“There’s kind of arc, or sweep, of where the students come from,” Bishop Madden said of the draw of the various schools. “It affects the city and also a larger group as well.”

An archdiocese spokesman said the dialogue was emotional for both sides.

“They (the contingent from Gibbons) were measured, respectful, passionate, but in a way that you could tell they cared about what they were leaving behind and everything they loved about the school,” said Sean Caine, the archdiocese’s director of communications of the students.

Bishop Madden said that the experience, in which he could help dispel rumors and provide comfort, was a positive one. Communicating one-on-one, he said, was important.

“The painful part about it was seeing the ones there who were being directly affected,” Bishop Madden said. “We deal with numbers and the numbers are the reality and that’s what we have to make our decisions, but it’s like in medicine. You know the course the disease is going to take, you hope for a result, you know the treatments to give, but when you see the patient there, it’s different.”

Talking to The Catholic Review about the meeting, which was not open to the media, Bishop Madden became emotional. Twice during the interview, he had to compose himself.