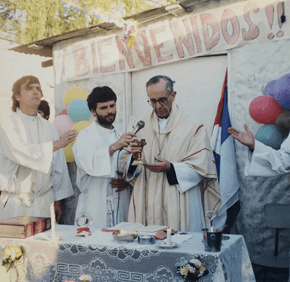 By Carol Glatz
Catholic News Service
VATICAN CITY – The thing Pope Francis dislikes most about his job as pontiff is the paperwork, he told residents of an Argentine slum in which he used to minister.
“Paperwork, office work, it’s the thing I always struggled with,” the pope said in response to the question, “What’s the thing you like least about your mission as pope?”
The pope’s remarks came during a pre-recorded televised video message to the residents of Village 1-11-14 — a Buenos Aires’ shantytown inhabited mostly by South American immigrants.
Members of the community radio station, Radio FM 88 of Bajo Flores, conducted the interview with the pope at the Vatican before he left for a Lenten retreat outside of Rome March 9.
The Vatican newspaper, L’Osservatore Romano, published small portions of the interview March 14.
The station broadcast the question-and-answer interview for residents on large screens after a March 13 Mass celebrating the one-year anniversary of the pope’s election.
As Cardinal Jorge Bergoglio of Buenos Aires, the pope used to minister in the slums of the city: sharing simple meals with residents, celebrating the sacraments in their parishes and taking Communion to the elderly in their homes.
He encouraged and supported priests to minister in the “peripheries” where the city’s poorest and most marginalized lived, the newspaper said.
The pope was asked in the interview about the work of these “curas villeros,” or priests ministering in the shanties, and whether they represented leftist ideals.
The pope said the priests’ work “wasn’t something ideological but rather (is) an apostolic mission.”
In reference to a question about a priest slain in 1974 and other priests similarly accused of being communist, the pope said, “They were not communist.” Instead, they were “great priests who fought for life: They worked to bring the Word of God to the marginalized. They were priests who listened to the people of God and fought for justice.”
The pope also pointed out the need to have an approach “of poverty, service and helping others” while also letting oneself be helped by others. He asked his audience to pray for him, saying he “needed the support of the people of God, especially through prayer.”
See also:
When pope and president meet, what will be said?
Timeline: Pope Francis’ eventful first year
One year in, Pope Francis continues to confound, inspire
Copyright (c) 2014 Catholic News Service/U.S. Conference of Catholic Bishops
PrevNext