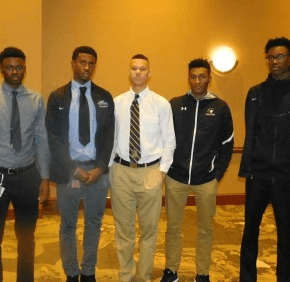 One of the nation’s top basketball recruits in the class of 2018, Smith is averaging 17 points, nine rebounds and three blocked shots per game for coach Pat Clatchey’s Gaels. In garnering Player of the Year recognition from coaches and media, Smith beat out John Carroll junior Immanuel Quickley, who earned a share of the award last year.

The honors were announced Feb. 20, during a luncheon at the Doubletree in Pikesville.

The guest speaker was Orlando “Bino” Ranson, a University of Maryland assistant coach who graduated from St. Frances Academy. Ranson stressed the rich history of the BCL, and the accountability that is required of players to maintain it.

Mount St. Joseph and St. Maria Goretti both finished 11-3 in the regular season, and will open the 46th annual BCL tournament at home March 2. The semifinals and finals will be played at Goucher College, March 4 and 5, respectively.