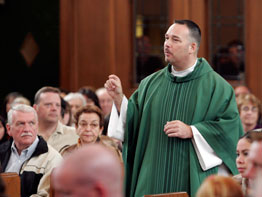 VATICAN CITY – Catholics and Protestants in the Philippines and the United States gave very high marks to their preachers and homilists, while survey respondents in France and Hong Kong were not impressed at all.

A survey conducted for the Catholic Biblical Federation also showed that respondents in the Philippines and the United States said reading the Bible was their preferred religious activity, while respondents in seven other countries said they would rather watch a television program with a religious theme.

The results are part of an ongoing study of the Bible-related habits of adults around the world; the survey has been completed in 12 nations on three continents and currently is under way in South Africa and Kenya.

Initial results from telephone interviews conducted by GfK-Eurisko were presented at the Vatican in April and further details were released Oct. 14 during the world Synod of Bishops on the Bible.

The survey covered several of the key questions being discussed inside the synod, including the quality of homilies, owning a Bible, praying with the Bible and defining what it means to say the Bible is the “inspired word of God.”

Luca Diotallevi, an Italian sociology professor who coordinated research on the survey results, said the question about homilies is important because a sermon is “the principal means of communicating the Bible’s content” when Mass is the only time most Catholics hear a portion of the Bible.

In the Philippines, 66 percent of the respondents said they “very much” appreciated the last homily they heard; in the United States, 47 percent said “very much.”

“Very much” was not the top response in any other country. Only 8 percent of French respondents and only 2 percent of respondents in Hong Kong gave top marks to the last homily they heard.

Mr. Diotallevi said he believes the differences reflect the fact that “in Europe homilies involve more moralizing, while in the United States and the Philippines they are more Bible-based. Also, in the United States there is more competition” among churches and Americans are more likely than Europeans to move to a different parish in search of better homilies.

But, the sociologist said, what should worry the churches the most is not the percentage of people who said they strongly disliked the last homily they heard, but those who said they couldn’t remember or had never even heard a homily.

In the Netherlands, Russia and Hong Kong, “I never listened to one” was the top answer.

One survey result Mr. Diotallevi said was particularly important was the fact that Catholics in Germany, the United States and the United Kingdom are similar statistically to their Protestant neighbors when it comes to owning and reading the Bible.

He said researchers wanted to know if any progress had been made since the Second Vatican Council in bringing Catholics closer to Protestants in Bible habits.

The survey results, Mr. Diotallevi said, provided “good indications that the differences that once existed between Catholics and Protestants regarding the Scriptures have attenuated or disappeared.”

Researchers chose to look at Germany, the United States, the United Kingdom and the Netherlands because they were the countries where a random sample of adults would include a statistically healthy mix of Catholics and Protestants.

In the three countries, similar percentages of Catholics and Protestants gave the same response when asked if the Bible’s content was true or false, interesting or boring, and easy or difficult to understand.