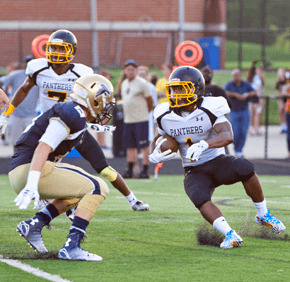 By Paul McMullen
pmcmullen@CatholicReview.org
Twitter@ReviewMcMullen
What did his friends from sandlot football think when Maurice Williams enrolled at a high school that had no tradition, let alone an on-campus field?
“They thought I was stupid,” he said.
A 5-foot-7-inch senior running back, Williams and his St. Frances Academy teammates enjoy defying skeptics of their East Baltimore school, which has always concerned itself more with what it has rather than what it lacks.
Who needs history and facilities anyway, when you have talent, a resourceful staff, faith and ambition?
Last year the Panthers leapt from the Maryland Interscholastic Athletic Association C Conference to the A Conference, and promptly beat Calvert Hall, Loyola Blakefield and Mount St. Joseph.
St. Frances Academy has come this far this fast by heeding the example of its foundress.
“Mother Lange was not risk-averse,” Deacon Curtis Turner reminded, of the Oblate Sister of Providence who in 1828 opened what is now the nation’s oldest, continuously operating, predominantly African-American Catholic high school.
Deacon Turner became principal in 2008, the same year the school added football, the logic being, he said, “that the boys needed something to do in the afternoon” in the fall.
To view a slideshow, navigate the arrows below.
See a photo you would like to purchase? Click here.
When coach Messay Hailemariam came on board in 2011, the scope of that venture widened.
A native of Ethopia, Hailemariam had played and coached in the Washington, D.C., area, had a profitable chain of fitness facilities, and trained college prospects.
In the process of raising male enrollment from 80 to 120, the Panthers have developed the likes of Nnamdi Egbuaba, who was born and raised in Nigeria but now is on scholarship at the University of Maryland, and attracted transfers such as Rahshaun Smith, a junior who played for Calvert Hall last season.
And what would Mother Lange make of a white kid, such as Chesapeake-Anne Arundel transfer Matthew Newell, starting at quarterback?
“She would love it,” Deacon Turner said. “We’re quick to say, we’re historically black, but we’re not exclusively black.”
Smith’s position coach is Tommy Polley, maybe the best prep athlete in Baltimore in the 1990s, who played six seasons in the National Football League. The running backs are mentored by Lamont Jordan, a former University of Maryland star who spent eight years in the NFL.
“This is my purpose,” Jordan said. “I want to work with inner-city youths.”
Hailemariam is the director of admissions and assistant athletic director, but he doesn’t draw a coach’s salary, nor do his assistants.
Asked about the size of the budget, Deacon Turner said, “Whatever we happen to have.”
“An alumnus works for Enterprise,” he added. “Rather than charter a bus, two or three coaches will drive vans.”
Hailemariam donated equipment for the weight room. The Panthers play their home games at Patterson Park, and the varsity practices at the Madison Square Recreation Center, alongside “The Dome,” a roofed basketball court frequented by NBA players.
Their practice field has no goal posts, and the contrast between the have-nots and the haves was apparent Sept. 5 in Olney.
St. Frances Academy’s neighbor to the south is the Baltimore City Detention Center. Our Lady of Good Counsel has a rambling campus in Montgomery County, and a stadium with artificial turf and lights. The Panthers have yet to notch the 30th win in their history; the Falcons’ Bob Milloy is closing in on the 400th of his coaching career.
Last year, Good Counsel routed St. Frances Academy, 42-6. After his Falcons needed a 40-yard field goal in overtime to escape with a 9-6 victory, Milloy sought out the Panthers’ Smith, for some praise and encouragement.
With Hailemariam tending to a family issue, assistant coach Corey Robinson, who played at Cardinal Gibbons, served as acting head coach. After the emotional loss, his parting words were one last reminder that football is a game of details.
“Let’s get the sideline cleaned up,” he said, “and thank your parents for coming.”
Also see:
Beyond the Bell: Calvert Hall’s peer ministry program makes ‘faith cool’
PrevNext