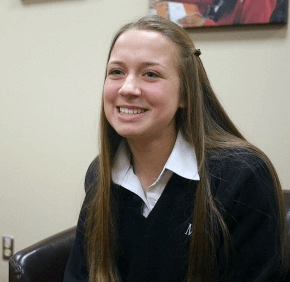 By Melody Simmons
Special to the Review
At the sweet age of 16, Lucie Amrhein dreams of ways that she can save the world.
To her, it’s one teddy bear at a time.
The Mercy High School sophomore has made about 700 of the cuddly little brown bears over the past five years at the Build-A-Bear Workshop in the Towson Town Center, then given them to young children battling illness in Baltimore.
Her motto is simple: “One bear, one hug, from one child to another.”
With a nonprofit based out of her house in Havre de Grace, Amrhein’s “Hugs from Lucie” has become an inspiration to hundreds of families since 2008.
“Lucie is a beautiful young lady and has a heart of gold,” said Debbie Hood, vice president of the Ronald McDonald House, near Johns Hopkins Hospital in east Baltimore, where most of the teddy bears find a home. “She is unbelievably kind and will do everything she can to make a child smile. She is all about kids helping kids.”
Amrhein said she started making bears at age 11.
“One day we were going through all our toys in the basement … and I decided to donate my toys to my little brother’s pre-school,” she said. “The principal there gave me a gift card to Build-A-Bear for $25 – and she wrote on it ‘for good use.’”
That small gift card ignited a passion in Amrhein to give back to others – with the help of a neighbor who worked at the Ronald McDonald House. The gift card – and some matching birthday money – allowed her to make 15 bears to give to the children there.
“I loved it,” she said of the mission. “I really liked how I could make kids happy with just a $12 bear.”
The teddy bears offer comfort and smiles to children with serious medical conditions.
“It’s nice to have something that will make you happy,” she said. “I’ve talked to kids who are a year old. I’ve talked to 18-year-olds. I just go and hang out and do activities – I’ve gotten really close to some families.”
The project started small, with Amrhein and her mother, Belinda, making the bears. But once it grew, she decided to formalize things and became a full nonprofit in order to raise funds to make more bears.

One of the Build-A-Bear teddy bears created by “Hugs From Lucie,” a nonprofit that gives free teddy bears to sick children at the Ronald McDonald House and local hospitals, waits for a new owner. (Karen Osborne | CR Staff)

She has held fundraisers to raise money to make teddy bears at Chick-fil-A and sweetFrog frozen yogurt. Before Christmas, she invites people to come to Build-A-Bear and make and donate bears. Last December, that yielded 60 bears, all dressed in a custom “Hugs from Lucie” T-shirt.
“Lucie is the only student we’ve had who came here with her own board of directors,” said Tess Veloso, a spokeswoman for Mercy High School.
Her good works have inspired other students. Jessica Midwig, a 16-year-old junior at Mercy, asked for donations for “Hugs from Lucie” rather than gifts at her Sweet 16 birthday party last April. She was able to give her friend $400.
“I have been very blessed,” Midwig said, “it was unnecessary to have presents. I realized somebody in the same hallway as me had an amazing charity. I just hope that it made the children feel that somebody else loved them. I can’t imagine what they are going through.”
A parishioner of St. Joseph in Fullerton, Amrhein has also given out teddy bears to children in Sinai Hospital and on a mission trip in Belize last March, where she delivered 50 bears.
Amrhein – who is also very active at Mercy in sports, theater, campus ministries and student government –said the nonprofit has helped her learn time management. She hopes to one day study global development.
Making the teddy bears and giving them out has given her confidence in possibly embarking on the world stage.
“This has taught me that you can do big things,” she said.
Also see:
Beyond the Bell: St. John’s Catholic Prep ski club hits the slopes
Beyond the Bell: Ukaladies strum a happy tune
Beyond the Bell: Loyola Blakefield forensics dominates Baltimore league
Beyond the Bell: Wide-ranging ensembles set apart Spalding’s music program
Beyond the Bell: With school-wide support, annual musicals take John Carroll’s spotlight
Beyond the Bell: Mount de Sales Club supports the troops
By giving food to neighbors, IND roots holiday – and students – in giving
Beyond the Bell: Social Justice Coalition at Maryvale makes a difference
Beyond the Bell: Seton Keough’s A Cappella choir
Beyond the Bell: Catholic High robotics team raises the bar
Beyond the Bell: St. Frances Academy football takes leap of faith
Beyond the Bell: Calvert Hall’s peer ministry program makes faith cool
PrevNext