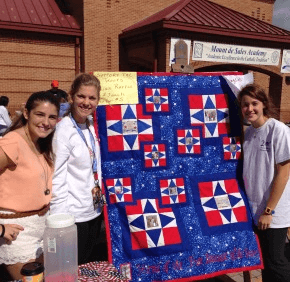 By Melody Simmons
Special to the Review
CATONSVILLE – When word arrives that a jet bringing soldiers back to the United States will soon land, a group of Mount de Sales Academy students snap to attention.
Its Support the Troops Club readies patriotic signs and snack bags to help greet returning military at Baltimore-Washington International Airport. Soon, a caravan of de Sales students is on its way to the terminal as part of Maryland Operation Welcome Home, a nonprofit welcoming effort.
“There’s so much energy,” said Christina Schell, 17, “when everyone’s clapping and cheering when they (military personnel) come in.”
Schell comes from a family that includes members of the military, and knows the importance of helping to honor soldiers as they return home from service.
She is co-president of the club, along with Grace Smoot, another senior.
“It’s put things into perspective,” Smoot said, “how much they sacrifice.”
With 70 members, the four-year-old service club is one of the school’s most popular. It meets weekly and holds other fundraisers to raise money for military and their families.
A handmade patriotic quilt with photographs stitched into the squares will be raffled at the school’s Christmas Bazaar Dec. 6-7. That same month, dozens of handmade and individually decorated Christmas stockings will be completed for children of military families, and a trip is planned for Arlington National Cemetery to help lay wreaths on gravesites.
The club has hosted military appreciation breakfasts and speaking engagements featuring enlisted women, and a 5K “Sailors for Soldiers” in the spring that plays off the school’s athletic mascot. The first two raised $16,500, according to Eileen Clements, the group’s moderator.
“Our girls get the bigger picture,” said Clements, who chairs the Fine Arts department at de Sales. “I would hope that they see that there is an awful lot that goes into the things that make our country our country – a lot of it is built on the backbone of the men and women who protect us.”
Last year’s president of the Support the Troops Club is at the U.S. Coast Guard Academy in New London, Conn. The class of 2014 also sent a graduate to the U.S. Military Academy at West Point, N.Y.
Beth Hartman, a senior, aspires to become a pilot and has applied to the U.S. Air Force Academy. She transferred to Mount de Sales as a junior when her father’s military career brought their family to the area. Being in the club has allowed her to give back, she said.
“I feel like a lot of people take military people, firefighters, policemen for granted,”Hartman said.
Briana Prescott said she joined Support the Troops in freshman year on a whim, but said, “It has helped me to respect people more.”
Appreciation for the group extends to the principal’s office.
“Support the Troops Club is an active and vital group at Mount de Sales,” said Dominican Sister Mary Thomas, “that upholds the school’s mission and commitment to moral responsibility, service to others, and the dignity of the human person.”
Also see:
Beyond the Bell: Social Justice Coalition at Maryvale makes a difference
Beyond the Bell: Seton Keough’s A Cappella choir
Beyond the Bell: Catholic High robotics team raises the bar
Beyond the Bell: St. Frances Academy football takes leap of faith
Beyond the Bell: Calvert Hall’s peer ministry program makes faith cool
PrevNext