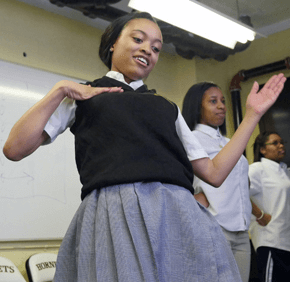 By Erik Zygmont
ezygmont@CatholicReview.org
“Give me some!” shout roughly half the members of the Cristo Rey Jesuit High School step team, emphasizing the “some.”
“OK!” respond the rest, in military cadence.
In the moment of silence before the routine begins, Rae Dickens, team director and a math teacher at the co-educational school in Fells Point, lightly places her right hand just below her throat.
“Oh, I like that,” she whispers.
The steppers go to work, their bodies becoming percussive instruments in a performance of sound and sight. The first third stomps, claps and strikes, hitting their chests, thighs and clapping their hands under their legs. They finish with a flurry, and the second third takes over, then the third. After three mini-performances, the team performs as one in a staccato crescendo.
In the silence that follows, the steppers pant heavily, their skin shining with moisture.
“I need oxygen,” says Terryeon Bradford, a senior. “I can’t breathe anymore.”
Gregory Peterson, another senior, rolls up his sleeves to reveal hairy arms.
“I’ve just go to let some of my werewolf show,” he says. “It’s OK.”
Only six years old, the Cristo Rey step team is already a major draw at the coed high school.
“They do a great job of creating an atmosphere of energy,” says Justin White, director of community outreach and service, as well as a theology teacher.
The team’s endeavors have been so valuable to the school and community, he adds, that members may earn service hours – a feature of student life at Cristo Rey – for practices and performances.
“They’re learning discipline,” he adds. “They’re learning engagement, and they’re learning to bring their gifts to the community, which is what community outreach is all about, in my opinion.”
Janet Shock, director of the school’s corporate internship program – which supplements traditional classroom learning with on-the-job experience – says that the step team performers are “incredible ambassadors” to Cristo Rey’s corporate partners.
A recent performance at the Greater Baltimore Medical Center in Towson, Shock says, attracted employees from throughout the hospital.
“Having the step team there and giving other departments some exposure to Cristo Rey helps the company, I think, find other placements for our students,” she says.
For the students, stepping is plain fun, but also inspiring.
“The moment I saw the step team was the moment I confirmed that I wanted to go to Cristo Rey,” says Bradford.
Dickens remembers Bradford’s freshman days.
“(He) came to me with two left feet,” she says. “I told him that it’s not about knowing how to step; it’s about being dedicated.”
Bradford displayed a desire to learn, and he is now co-captain of the team.
As a leader, Bradford’s goal is to have his team “sound as one.”
“It’s just like everything else,” he says. “You have to do what’s best for the team, not just what’s best for yourself.”
Bradford calls the March 27 performance at Rams Head Live – at a Cristo Rey fundraising event called Stand Up for Students – “the coolest step show this year.”
“The moment we stood on that stage, everyone just transformed to a professional performer,” he says.
Like Bradford, freshman Bresché Jones was partially drawn to Cristo Rey by the step team. She enjoys the emotional release of stepping.
“It’s basically you putting in all your time, energy and effort,” she says. “You’re letting it all out through making noise, but with people you get along with.”
“It makes other people see you differently,” she adds.
Dickens, who stepped in the 1990s, started the team in 2009.
“Each year the team has grown,” she says. “These kids are very energetic and passionate about stepping.”
She adds that the unique skill will help her steppers build friendships and fit in.
“It’s just creates a different kind of bond,” she says.

Beyond the Bell: Hagerstown students go far beyond the boundaries