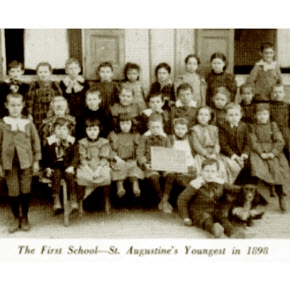 It’s not that unusual for children to be the second or sometimes even the third generation of their family to attend the same Catholic elementary school, but how about a sixth generation?

The Bennett families of Relay have been sending their children to St. Augustine School in nearby Elkridge for more than 100 years. They have been members of the 167-year-old Howard County parish, the church where most of them were married, even longer.

“I think you can say that St. Augustine School, and, of course, the church, has been and continues to be a very special place for our family for a very long time,” said Joe Bennett who attended the school in the 1950s.

His children followed him through St. Augustine. Two of his grandchildren, Matthew and Nicholas Bennett, go there now, while their younger brother, Andrew, is about to enter the school’s kindergarten.
The family tradition began with Joe Bennett’s great-grandfather, Joseph A. Byrne, who was the gardener for the entire B&O Railroad system and the son of Irish immigrant Andrew Byrne, who had been a baggage master in Relay.
While there is no documentary evidence that Joseph Byrne went to St. Augustine School, he would have been the right age to go there sometime after 1857 when the school was established – and his great-grandson is sure he did.
“They were a strong Catholic family, and that was the only Catholic school anywhere near them,” Joe Bennett explained.

He has fond memories of the old, four classroom school before the current one was built in 1957, although he graduated from it in 1959.

He particularly remembers the School Sisters of Notre Dame, who took over the school in 1892.

“They were really good nuns and excellent teachers,” Joe Bennett said, noting that he went on to attend Mount St. Joseph High School. “All of my children and grandchildren who graduated from St. Augustine went on to Catholic high schools, so we all owe a lot to the school.”

He said his mother, 92-year-old Margaret Bennett, also has fond memories of the school and the teaching Sisters, but would often tell him about another memory that was a little different.

“In those days,” he said, “the children walked about a mile and a half to school every day and my mother said she was always ‘pretty scared’ when they had to cross the bridge.”

By that, he meant the high, 176-year-old historic Thomas Viaduct stone railroad bridge that spans the Patapsco River between Relay and Elkridge.

“I’ve crossed it on foot myself and I can easily see what she meant, and she did it every school day,” Joe Bennett said. He said the walkways projected out to the side of the bridge, high above the river, “and it was like walking over air, and not only that but you were next to the railroad tracks.”

Once across, though, the friendly school awaited the children and their fears were quickly calmed “until they had to make the return walk home,” he added with a chuckle.

Six generations of one family at St. Augustine is “a record we’re proud of,” said Tamara Sciullo, St. Augustine School’s director of advancement.

“We have some second generation children here but six, wow, that’s something,” she said.