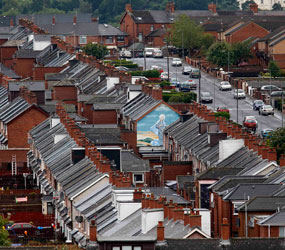 BELFAST, Northern Ireland – The bishop of Belfast appealed for Catholic and Protestant residents to prove to the world they can live together in peace after fresh sectarian violence flared during the region’s contentious Protestant marching season.

Bishop Noel Treanor of Down and Connor appealed to both sides to show restraint and respect toward police after 22 police officers were injured July 11.

“I ask all who attend parades or protests in the days ahead to avoid provocation,” he said in a statement July 12.

He urged local residents to ensure that “events are not manipulated by destructive influences from outside the communities where parades take place.”

Police have expressed concern that fringe elements opposed to the 1998 Good Friday peace accord might be orchestrating communal strife.

On July 12, the traditional “Orangeman’s day,” Loyalist demonstrations commemorate the 1690 defeat of the Catholic King James II by the Protestant Prince William of Orange that definitively installed Protestantism as the religion of the British monarchy.

Nationalists – who want Northern Ireland to break from Great Britain and form a single united Ireland with the Irish Republic – are angry at what they describe as provocation and triumphalism from the Loyalist marchers.

Loyalist protesters – mainly Protestants who want Northern Ireland to remain part of Great Britain – reacted angrily and rioted when police removed British and paramilitary flags that had been erected near a Catholic Church in Ballyclare July 9. Six police officers were injured after protesters drove a hijacked bus into a police vehicle.

The same weekend, a Catholic Church in nearby Ballymena was damaged when paint was thrown at the exterior. From 1996 to 1998, the church had been the scene of Loyalist protests during weekly Masses.

Bishop Treanor appealed for both communities to “show the world that here in Northern Ireland we can live and let live in peace.”

“Let us prove to ourselves and the world that we can celebrate our diversity in a manner that affirms our common dignity and future. Let us show that, when confronted with conflicting rights and traditions, we can make pathways of diversity and peace,” he said.

After several years of relative calm, parades have become increasingly controversial in recent years as Orangemen have sought to march their traditional routes while many Catholic residents have objected, insisting that the routes are no longer exclusively Protestant enclaves.

The Orange Order, which organizes the parades, has been accused of sectarianism given, for example, the group’s absolute ban on members attending Catholic religious services or marrying a member of the Catholic Church.