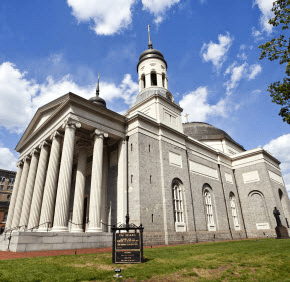 By Elizabeth Lowe
elowe@CatholicReview.org
Repairs to the interior of the Basilica of the National Shrine of the Assumption of the Blessed Virgin Mary in Baltimore are expected to be completed by March 8, before the floors will be refinished.
Dozens of cracks appeared in the interior basilica domes after an August 2011, 5.8-magnitude earthquake. Repairs, which began in August 2012, are expected to cost approximately $3 million, said Douglas Johnson, capital project manager for the archdiocese. Most of the cost is covered by insurance, Johnson said.
The same team from Henry H. Lewis Contractors, the Owings Mills-based company that did the two-year, multi-million dollar restoration of the basilica, made the repairs.
Workers have been fixing cracks in the interior domes of the basilica, under the main dome in the center of the church and under domes in the apse and west end of the basilica.
“A lot of those were structural cracks, but not all,” said Johnson, who added that in order to repair the cracks, six, 16-foot rods were grouted into place.
Robert Reier, the basilica’s operations manager, said the extent of the damage was apparent after the plaster was removed.
“The earthquake didn’t spare any particular area,” Reier said. “It’s amazing that, given the magnitude of the earthquake, just how well she (the church) fared and that they were able to do the repairs.”
The organ, which also sustained damage from the earthquake, is being repaired and should be completed by Easter Sunday, March 31, Reier said.
In addition, marks on the walls of the basilica’s central dome above the halogen lamps caused by candle smoke, debris, dust, incense and soot have been cleaned and painted. The dome uplights will only be used for special liturgies, including Christmas and Easter Masses.
“It’s been a slow progression,” Reier said. “It just looks great. It seems a little bit brighter and that’s because it has a fresh coat of paint.”
During construction, the basilica has been open for weekend Masses and previously scheduled weddings. Weekday Masses and daily tours have been in the undercroft.
The main church remains closed during the week and the undercroft continues to be used for tours, Reier said.
Work to the exterior of the basilica’s twin towers and central dome involves repairing and replacing hand-formed stucco, Reier said. The outside temperature must remain consistently above 41 degrees during the 12-hour curing process to allow the stucco to bond correctly.
Baltimore Archbishop William E. Lori is expected to celebrate Mass at the basilica at 10:45 a.m. Easter Sunday.
Also see:
Seven sites available for Year of Faith indulgences
Copyright (c) March 1, 2013 CatholicReview.org
PrevNext