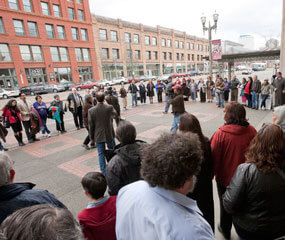 The five, including two Jesuit priests, a Sacred Heart Sister and two grandmothers – one from Baltimore – were found guilty of a series of federal charges in December for entering a U.S. Navy weapons depot in Bangor, Wash., on All Saints’ Day in 2009 in a biblically based protest against the country’s nuclear weapons policy.

The judge admitted to a packed courtroom in Tacoma that prison terms would likely fail to deter similar actions by the defendants in the future, but said he was required to uphold the law and send them to prison to prevent anarchy, said Bill Quigley, a law professor at Loyola University New Orleans who helped the activists prepare their defense.

Each of the defendants, who called themselves the Disarm Now Plowshares, read statements before being sentenced. Each said they felt personally responsible for disarming nuclear weapons to prevent suffering and death for people who would better benefit from improved social services and humanitarian aid, Quigley said.

Sentences handed down by Settles were:

– Greenwald to six months in prison and 60 hours of community service.

– Crane and Father Kelly to 15 months in prison.

They also were ordered to pay $5,300 in restitution for the damage they caused at the facility and will remain on probation for one year after completing their sentences.

At their five-day trial, the activists admitted entering Naval Base Kitsap 20 miles west of Seattle by using bolt cutters to cut through a chain-link fence late at night. They said they walked an estimated four miles undetected for hours to their target, the Strategic Weapons Facility, Pacific.

Once at the weapons bunkers, they cut through two more chain-link fences, poured their own blood on the ground, hammered on a roadway and fences, scattered sunflower seeds and unfurled two banners that read: “Disarm Now Plowshares, Trident: Illegal + Immoral.” They said they prayed until dawn, waiting for military personnel to arrive.

Prosecutors maintained that the defendants caused malicious destruction to Navy property. The base is the West Coast home of the Trident nuclear-armed submarine. More than 2,300 nuclear warheads are believed to be stored at the site, according to the National Resources Defense Council.

Quigley said that after the sentencing, the 200 supporters of the activists who filled the courtroom left the courthouse singing the traditional Latin canon “Dona Nobis Pacem” (“Grant Us Peace”).
Click here to read a Catholic Review profile of Susan Crane that ran in December, 2010.