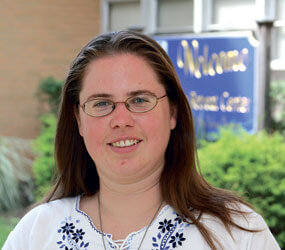 It’s only slightly unsettling to Marie Prosser that she possesses a one-way ticket to Ethiopia.

Departing in January for a potential 18-month mission teaching high school English in Addis Ababa, one of the largest cities in Africa, Prosser’s Christian trust knows that the Salesians of Don Bosco, who are sending her there, will provide the return airline ticket.

Prosser is one of 14 lay volunteers from the U.S. commissioned for various Salesian missions during 2011-12, at vocational schools in Ethiopia, Brazil, Bolivia, Cambodia, India and Rwanda. The Salesians, with works in 130 countries, are well known for their more than 170 vocational schools throughout the world.

“I’ve been interested in going to Africa since college,” the 31-year-old science teacher said. “It’s good to help people that have stuff going on in their lives that I’m not used to.”

To prepare for her mission, she attended a month-long orientation program: two weeks at Maryknoll in Ossining, N.Y., a week at a Salesian summer day camp in Port Chester, N.Y., followed by a retreat week with Salesians at Haverstraw-Stony Point, N.Y.

Prosser’s parents wish their daughter the best and are supportive of the mission, accustomed to the idea of their children wanting to serve. Another daughter spent a year in Honduras, and Marie earlier completed a year of domestic volunteer service in Baltimore with the Capuchins when she taught at St. Frances Academy.

“I think we all want the best for our children,” said Jim Prosser, a deacon at Our Lady of Grace in Parkton, “even when that means letting go of what we love. And I think that the best comes to them when they are striving to do God’s will, as challenging as it may be.”

Her school base in Ethiopia will be the Don Bosco Mekanessa, named after a 19th-century priest who started schools for street boys.

“He was a joyful person and was about educating the whole child,” recited Marie. “His philosophy was that no matter what you’re doing in life, you couldn’t leave out the playground. He was very good at making his school a place where children wanted to be. I can support that mission anywhere in the world.”

Influenced in part by participating in World Youth Day at Cologne, Germany, in 2005, Prosser’s Catholic faith is her obvious motivation to give so deeply.

“If you can trust God at home, you can trust him when you’re halfway around the world,” said the unmarried missionary, which explains how she is able to try a different path for a year. “I can just pick up and go. A lot of my friends wouldn’t be able to do this.”

The downfall of being away from home is that she will miss important events, such as her brother’s college graduation next May. The upside is that she is ready to wean herself from technology.

“That’s appealing to me,” she said. “So much of my time gets eaten up by the computer. It probably will be healthy!”

Equal parts excited and nervous, Prosser said the biggest challenge she thinks she’ll face is being a foreigner. Prosser has lived near Baltimore her entire life, and never been out of the country for more than 10 days.

“It will be completely different when I’m the obvious foreigner,” she said. “I think that’s going to be very humbling. I’m used to knowing things about where I live. I don’t even know the language (Amharic) and will have to take advice from everyone, even kids. That’s a big trust factor, but there are people out there gutsier than I am.

“Hopefully it will be a challenge – and a growing experience as well.”