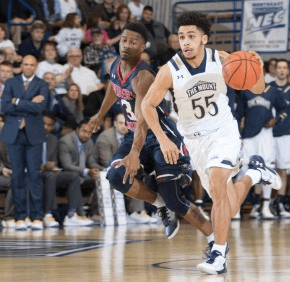 EMMITSBURG – Mount St. Mary’s University is headed to the NCAA basketball tournament, thanks in no small part to the contributions of two underclassmen out of the Baltimore Catholic League.

Sophomore Elijah Long, a graduate of The John Carroll School in Bel Air, and freshman Miles Wilson, a product of Mount St. Joseph in Baltimore, are the leading- and third-leading scorers for the Mountaineers, who claimed the Northeast Conference championship with a 71-61 victory over St. Francis (Pa.).

A No. 16 seed, Mount St. Mary’s beat the University of New Orleans 67-66 March 14 in a “First Four” game in Dayton, Ohio. The Mountaineers advanced in the East Region to a first-round game in Buffalo March 16 (7:10 p.m., CBS) against Villanova, the defending champion, which just happened to be led in last year’s NCAA final by Phil Booth Jr., another player from the BCL.

A native of Mississauga, Ontario, Long transferred to John Carroll for his senior year. He attributed the competitive nature of the BCL and Tony Martin, then the Patriots’ coach, for helping him get to where he is today.

Long remarked that his transition from John Carroll to the Mount was smooth because of his experience in playing with other Division I-bound athletes.

Two years ago a John Carroll team that also included BCL Player of the Year Kimbal Mackenzie, who last week helped Bucknell to the Patriot League title, and 6-10 Mike Tertsea, who is red-shirting at Rhode Island, lost to Calvert Hall in the BCL title game at the buzzer.

“Their (the BCL’s) talent level pushed my bar high,” Long said, “so I think that just helped me to become way more prepared than other people.”

The 6-foot guard averages a team-high 15.4 points and 4.4. assists, and is the Mountaineers’ second-leading rebounder, with 5.4 per game. He posted a career high 29 points against Fairleigh Dickinson University and averaged 22.0 points in the NEC tournament, where he was voted Most Valuable Player.

Jamion Christian, the coach who also directed Mount St. Mary’s to the NCAA tournament in 2014, praised the leadership skills of Long, who also leads the team in playing time, averaging 34.4 minutes a game.

“(He) has the ball (in his) hands a lot,” Christian said. “When you have the ball in your hands, you command a certain level of respect. He’s always had great leadership inside of him.”

Wilson hails from a Mount St. Joseph program that has won seven of the last 14 BCL tournaments. He began the season as a reserve, but dropped in 26 at Texas-Arlington Thanksgiving week and worked his way into the starting lineup.

Still just 18 years old, the 6-foot-5-inch Wilson is averaging 11.3 points on 46.3 percent shooting and 3.6 rebounds. He made NEC history by becoming the first first-year student to record a double-double in the tournament championship game.

Like Long, Wilson credited the BCL for preparing him for college basketball.

“My high school (had) good competition and a high level of play, so when I got to college, I was prepared,” Wilson explained. “Every night, you’re playing against high-level players. I played for one of the best teams in the league, so practice would be competitive and we just push each other, so we’d get better.”

His Mount St. Joseph classmates include Randy Miller Jr., a reserve for the Mountaineers.

As he did with Long, Christian also noted Wilson’s character.

“He’s a great competitor,” Christian said. “Every day he is the last guy in practice, really pushing everyone to work harder and to be better. He’s so coachable and he’s able to take skills from one day and apply them to the game really quickly.”

Christian is an admirer of a Baltimore Catholic League that in the last generation has produced NBA stars such as Carmelo Anthony and Rudy Gay, and collegiate standouts such as Juan Dixon and Will Thomas.

“I love the BCL” Christian said. “We’ve got such great players within an hour radius from here. It’s such a big benefit for us to be able to recruit those guys. I think until I got here, we hadn’t had a guy from the BCL (since) like 2006, so we try to get one or two guys from there every year.”

Collin Riviello, a member of the class of 2020 at Mount St. Mary’s, writes for the Mountain Echo, the student newspaper.