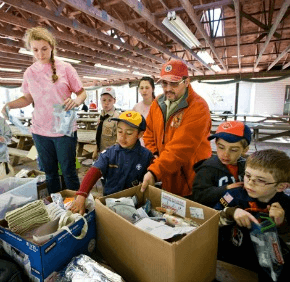 By Catholic Review Staff
Archbishop William E. Lori will celebrate the 86th annual Scout Mass in the Archdiocese of Baltimore Feb. 25, at 11 a.m., at St. John the Evangelist in Severna Park.
The archbishop will present various Catholic Scouting awards to Girl Scouts, Boy Scouts, Camp Fire Girls, American Heritage Girls, American Trail Life Boys and adult leaders at the conclusion of Mass, which is organized by the Archdiocesan Catholic Committee on Scouting.
Its chaplain is Monsignor Thomas L. Phillips, the pastor of St. Gabriel in Woodlawn.
“We come together as a Catholic Scout community to honor and celebrate (those) who have earned awards that encouraged them to learn more about their faith,” Monsignor Phillips said. “We also honor the adult Scouters who mentor and encourage Scouts to achieve more than the average understanding and practice of their Catholic religion.”
Monsignor Phillips said his committee “invites all Scouts, Scouters, parents and parishioners of the archdiocese to join in celebrating the deeper faith of these young Scouts who work to highlight that Scouts are reverent and will become adult citizens who proclaim God in our country.”
A special patch has been commissioned for the Scout Mass, featuring the crest of St. John the Evangelist School. Father James Proffitt is the pastor of St. John the Evangelist Parish, which sponsors Boy Scout Troop 450, which in 2015 earned Scouting’s Journey to Excellence Gold Unit award.
For more information about the Scout Mass and ordering the patch, email ccs@archbalt.org
PrevNext