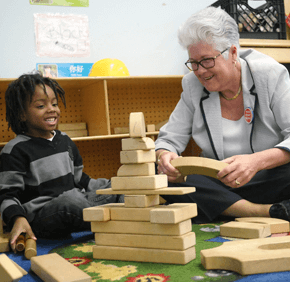 By Erik Zygmont
ezygmont@CatholicReview.org
Twitter @ReviewErik
Whatever Mary Gunning said in her job interview for Catholic Charities’ Head Start is lost to history, but we know what she told her friends after she took the job.
“Oh, I’m going to do this for a year or so until something better comes along.”
On April 23, Gunning found herself on stage at the Catholic Charities Annual Dinner, accepting a Distinguished Service Award for her 33 years of improving the lives of children and their families through Head Start.
“Well, quite simply, nothing better has come along,” Gunning, 58, told a crowd of several hundred at the Renaissance Baltimore Harborplace Hotel. “I may have had several opportunities to explore jobs where I would have received a higher salary, yet every one of my (Catholic) Charities colleagues in this room knows that’s not why we’re here.”
Gunning – and others at the event – referenced a counterintuitive aspect of giving.
“We are often loved, served and taught in a far greater way by the inspiring and resilient individuals and families who receive our services,” she said.
The evening, in fact, honored those people, too. The event’s theme, “The Power of One,” spoke to the positive difference a single compassionate person can make, but also to the enormous impact a compassionate act – however tiny in the cosmic sense – can have on the recipient.
At My Sister’s Place Women’s Center, a woman named Joy found the inspiration to break a 20-year stretch of addiction, find permanent housing, establish employment and reconnect with the son she had neglected in her trials.
“These women (at My Sister’s Place) cared about me unconditionally,” Joy said. “They simply wanted me to do better and be the woman I was created to be.”
Paying it forward, Joy, now four years clean, serves her community through Benevolent Baskets, a jobs program of My Sister’s Place.
Gunning – who has worked out of the Pigtown location of Catholic Charities Head Start of Baltimore City since 1990 – has seen many of the recipients of her agency’s services do the same thing. Sixty percent of Head Start staff are former Head Start parents, but they have always served in one capacity or another, Gunning said.
“They were very open in sharing the realities of their lives with me, and they kind of nurtured me as I learned on the job every day,” she said, “working with families who live in material poverty.”
Gunning attributes the unusually long-running enthusiasm she has felt for her job to the healthy work-life balance she has struck. A lifelong athlete – she was inducted into the Athletics Hall of Fame for her alma mater, Notre Dame Preparatory School, in 2010. Gunning plays basketball to this day and officiates girls’ basketball and lacrosse games.
Congratulating Gunning and her fellow Distinguished Service Award recipient, John McLaughlin, president and CEO of DAP Products Inc., Catholic Charities Executive Director William McCarthy Jr. again referenced The Power of One.
“We may never see the eradication of the issues we address – poverty, homelessness, mental illness, abuse and disability,” McCarthy said. “Yet we make an impact by getting involved in these pervasive issues because we know that our work makes life better for people.”
Also honored for its impact was the Institute of Notre Dame, recipient of the Anne Lindsey Otenasek Youth Service Award, which is given to high school students in recognition of outstanding volunteer service with Catholic Charities. The award recalls the service of Anne Lindsey Otenasek, a passenger on the ill-fated Pan American Flight 103 who had been an avid volunteer at Gallagher Services.
“I know that Institute of Notre Dame Principal Kathleen Casey, President Dr. Funke and Sister Hildie join me in saying that we are humbled and honored by this award because service is something that we try to practice every day at the Institute of Notre Dame,” said Michael Reeb, English and journalism instructor at the all-girls high school in Baltimore.
Catholic Charities also named five of its employees Mission in Action Award recipients, including Darnell Bias of St. Vincent’s Villa; Robin Johnson of My Sister’s Place; Tyra Parker of the Weinberg Housing and Resource Center; Coral Ross of Catholic Charities Senior Communities; and Suzie Templeton of Villa Maria Outpatient Clinic.
Archbishop William E. Lori offered closing remarks for the evening.
“It is a godsend and it is a grace that every single day, Catholic Charities is out there affirming human dignity and making our community a better place,” he said.

Head of Catholic Charities: Focus is on overcoming poverty, one person at a time