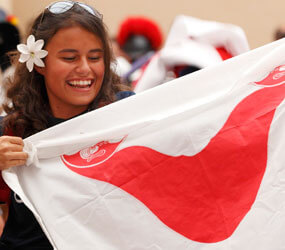 CASTEL GANDOLFO, Italy – Pope Benedict XVI appealed for reconciliation and respect for human rights in Syria and Libya where the governments have used force to try to end pro-democracy protests.

“With deep concern, I am following the dramatic and growing episodes of violence in Syria,” the pope said Aug. 7 at the end of his Angelus address to visitors gathered in the courtyard of the papal villa in Castel Gandolfo.

A government crackdown on protesters in Hama, Syria, Aug. 5 reportedly left two dozen people dead. The United Nations has said “around 2,000 people are reported to have been killed in clashes in Syria since protesters took to the streets in mid-March demanding greater civil liberties. The violent crackdown by the authorities has received widespread condemnation from the U.N., including the Security Council and top officials, as well as world leaders.”

Pope Benedict also used his Angelus address to call attention “to Libya where the power of weapons has not resolved the situation.”

The pope asked “Catholic faithful to pray that an effort for reconciliation would prevail over division and anger” in Syria and that the international community, which has been supporting protesters in Libya with NATO air strikes, would make a new attempt to find “a peace plan for the country through negotiation and constructive dialogue.”

Melkite Patriarch Gregoire III Laham of Damascus, Syria, told Vatican Radio that he thanked the pope for his call for prayers and for his love of the Middle East.

“We have invited all our Christians to pray in the churches each day for peace and reconciliation, including with our Muslim brothers and sisters, in order to face this situation,” he said.

“We do not fear Islam,” the patriarch said. “With God’s love for us, Christians and Muslims can overcome this crisis and this tragic situation in the Arab world and continue together – Christians, Muslims and Arabs – on the path to peace, progress, freedom and democracy,” he said.

Archbishop Mario Zenari, the nuncio in Syria, said on Vatican Radio that Syria has and continues to be “an exemplary country from the point of view of harmony among religious confessions and for mutual respect between the Muslim majority and Christian minority.”

“We hope this climate will continue and we pray that a way will be found, first of all, to stop the bloodshed,” the nuncio said.