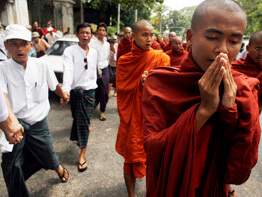 HONG KONG – Religious leaders in Asia have joined world leaders in calling for a peaceful solution to the crisis in Myanmar, where the military junta has launched a deadly crackdown on demonstrators.

In a message to the president of the Catholic Bishops’ Conference of Myanmar, Archbishop Orlando Quevedo of Cotabato, Philippines, secretary-general of the Hong Kong-based Federation of Asian Bishops’ Conferences, expressed his “deepest concern” over the “troubling events” in Myanmar.

“On behalf of the Federation of Asian Bishops’ Conferences, may I express our solidarity with you on your stand. I am hereby urging our member episcopal conferences and our associate members to offer prayers and holy Masses to the Lord of peace so that no further violence might take place,” Archbishop Quevedo wrote.

“We pray that the problems in your beloved country (will) be resolved through peaceful dialogue for the sake of the common good. This process we urge on all parties concerned,” he added.

In the southern Philippines, Archbishop Fernando Capalla of Davao told UCA News Sept. 27 that the Bishops-Ulama (Islamic scholars) Conference of Mindanao was sending prayers for peace and an assurance of fraternal solidarity to Archbishop Charles Bo of Yangon and the bishops of Myanmar.

In Seoul, South Korea, Bishop Boniface Choi Ki-san of Incheon, who left Myanmar Sept. 26, said there is little the country’s Catholic Church can do to address the current crisis.

“The number of Catholics is too small to have a positive impact on Myanmar’s social issues,” Bishop Choi said. Myanmar, with a population of 47 million, has fewer than 628,000 Catholics, according to the 2007 Myanmar Catholic Directory.

Bishop Choi also noted that church properties, including schools, were confiscated by the government decades ago.

Elsewhere, religious leaders and demonstrators called for peace in Myanmar. In India, church officials urged their government and the United Nations to intervene.

Father M.D. Thomas, secretary of the Indian bishops’ Commission for Interreligious Dialogue, told UCA News Sept. 28 that religious leaders have a duty to support the Myanmar people’s cause and should oppose the government’s “authoritarian measures.” He said the Indian government should tell its eastern neighbor to settle the current political crisis. The United Nations should negotiate with Myanmar’s government to restore peace and social order there, he added.

The Dalai Lama also has called for the junta to follow the Buddhist path of peace.

“As a Buddhist monk, I am appealing to the members of the military regime who believe in Buddhism to act in accordance with the sacred dharma (religious teaching) in the spirit of compassion and nonviolence,” he said.

The leader of exiled Tibetans is a Nobel Peace Prize laureate, as is Aung San Suu Kyi, the Myanmar opposition leader who has been kept under house arrest most of the time since 1990. Her party won an overwhelming victory in the national election that year, but was not allowed to take power.