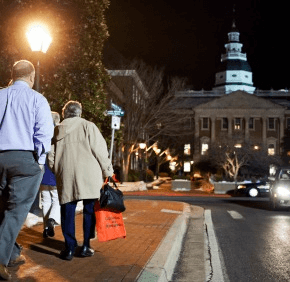 By Erik Zygmont
ezygmont@CatholicReview.org
Twitter @ReviewErik
ANNAPOLIS – As the 2017 legislative session opens Jan. 11, the Maryland bishops are eyeing a number of priorities, including maintaining educational opportunities for students from lower-income families, continuing justice system reforms, establishing paid sick time for workers across the state, and keeping the medical field dedicated to preserving and protecting life.

The Maryland Catholic Conference, the legislative lobbying arm of the state’s bishops, briefed members of the Catholic press Jan. 6 on what to expect over the 90-day session.

Education
Garrett O’Day, MCC associate director handling education, children and families said that while Governor Lawrence J. Hogan Jr. announced in December his plans to gradually double the state’s $5 million BOOST scholarship program, the MCC’s first focus would be getting the program funded at the same level as 2016.

“We’ll continue to make our case that it’s making a difference for a lot of kids across the state,” O’Day said.

In 2016, with little to no promotion on the part of the state and a six-week window to apply, 4,413 applications were reported received by the Maryland State Department of Education, with 3,023 being certified as being complete and from eligible families.

According to information provided by the MCC, 2,464 students who qualified for either free or reduced-price meals were awarded $4,769,200 in scholarships for the 2016-17 schoolyear.

BOOST, or Broadening Options and Opportunities for Students Today, was funded within the state’s budget for fiscal year 2017.

“We would try to get it expanded if the governor does put extra money (for BOOST) into the budget,” O’Day said. “We don’t know what any increase would look like or if it is certain to be there.”

Children and parents who have already received scholarships “are counting on this program,” O’Day added, noting it would not make sense to eliminate the help they have received. “We want to at least keep them where they’re at.”

Justice reform
O’Day touted 2016’s Justice Reinvestment Act, which among other changes eliminated mandatory minimum sentences for nonviolent drug offenses and emphasized drug treatment, and expressed hope that this year would include reforms to the juvenile justice system.

He said the MCC would pay attention to specific issues, including the automatic charging of juveniles as adults in certain situations, “as well as the life without parole issue,” so that “kids who commit crimes under the age of 18 cannot be kept hopelessly for the rest of their lives without any chance.”

“I think, overall, we are looking into these issues as just a step forward from the state’s repealing the death penalty,” said Mary Ellen Russell, executive director of the MCC.

“Numerous statements that come out of the (U.S. Conference of Catholic Bishops) call for our support of these issues,” O’Day said.

Anti-poverty
Dana Davenport, MCC associate director handling social and economic justice issues, said that the organization would once again throw its support behind the Maryland Healthy Working Families Act, which would require companies employing a certain number of workers to allow those workers to earn paid sick leave.

The bill passed the House of Delegates in 2016 but did not advance for a vote in the State Senate. This year’s bill, already filed in the house by Del. Luke Clippinger, a Democrat representing parts of Baltimore City, would require those employing 15 or more workers to allow employees to accrue at least one hour of paid sick leave for every 30 hours worked. Those employing 14 or fewer would have to allow those employees to accrue unpaid sick leave.

“As with last year, our goal is to pass the strongest Healthy Working Families Act to affect the most people, so the most people in the state can earn paid sick leave,” Davenport said.

She added the MCC would support strengthening the state’s earned income tax credit, which she called “one of the strongest anti-poverty programs in the country.”

“The average amount of time people utilize the earned income tax credit is three years,” Davenport said, noting that by that time, they have removed their hindrances to contributing to the local economy, having acquired a vehicle, permanent housing or other markers of economic stability.

Among other measures, she said that the MCC would like to see the minimum age for claiming the credit lowered from 25 to 18, “in recognition that there are a lot of younger workers supporting themselves and families.”

Protecting the vulnerable
The MCC is expecting a hard battle over physician-assisted suicide this year.

Last year, a bill that would have allowed a patient with a terminal diagnosis of six months or less to live to obtain a prescription for a lethal substance was withdrawn from the State Senate Judiciary Proceedings Committee by its sponsor, State Sen. Ronald Young, a Democrat representing parts of Washington and Frederick Counties.

Jennifer Briemann, MCC associate director handling respect for life issues said the conference has every reason to believe a bill will be formally proposed fairly early in the 2017 legislative session..

The office of State Sen. Guy Guzzone, a Democrat representing part of Howard County, told the Catholic Review in December that the senator would sponsor the bill in 2017. Guzzone is known for his advocacy on behalf of people with disabilities; disabilities advocacy organizations have strongly opposed such bills in Maryland in the past.

Briemann noted that Compassion and Choices, an organization that has advocated, in some cases successfully, for physician-assisted suicide in several states and has received major funding from George Soros’ Open Society Foundations, has scheduled a rally for Jan. 25 in Annapolis.

Opponents object to physician-assisted suicide on several grounds, including the possibility of coercion, the involvement of the medical community in the act of taking a life, the fallibility of doctors in putting a timeline on a patient’s life, and the creation of an atmosphere that devalues the lives of people who are sick, elderly or disabled.

The Catholic Church affirms the dignity of all life, from the moment of conception until natural death.

“Our Christian faith embraces all people, and doesn’t consider anyone a burden,” Russell added.

Get involved
MCC leaders said they appreciate the advocacy of all concerned about the above issues. The organization encourages those who wish to get involved to sign up for the Catholic Advocacy Network at mdcathcon.org/joincan. In addition to information on the issues, network members receive email alerts on legislation as well as pre-drafted communications to send to legislators that can be modified or sent as is.