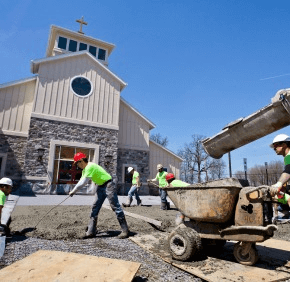 By Maria Wiering
mwiering@CatholicReview.org
URBANA – Gloria Przybocki pointed out the window of her husband’s pickup truck to The Villages of Urbana, a mixed-used development with 3,000 homes eight miles southeast of Frederick, just off I-270.
“If this was growth, what’s coming is something else,” she said.
Earthmovers dot undeveloped lots, and grassless plots mark new construction. Heading east from town – and the Interstate – the vista from MD-80 turns to farmland as the road passes St. Ignatius of Loyola Catholic Church in the unincorporated community of Ijamsville.
The bucolic landscape isn’t expected to last long. A white sign along the road declares new development: “Coming soon! Single family and townhomes.” Another sign announcing 1,800 new homes flaps in the ditch.
St. Ignatius is one of fastest-growing parishes in the Archdiocese of Baltimore, according to archdiocesan officials. The population of Urbana – home to St. Ignatius’ tiny but recently restored “country church” – exploded from 622 to 9,175 people between 2000 and 2010.
Other communities near Frederick tell similar – albeit less dramatic – stories, as Washington, D.C.-area families and new immigrants look for affordable housing and good schools, and the I-270 biotech corridor draws new companies and jobs.
For two Frederick-area parishes, new people mean new churches. St. Joseph-on -Carrollton Manor near Buckeystown outgrew its historic church and held most Masses in its parish center for 18 years before dedicating a new church May 4. On Frederick’s north side, St. Katharine Drexel plans to break ground for a church in spring 2015.
“That ring around the city is where things are happening,” said Thomas Little, pastoral associate to Bishop Mitchell T. Rozanski, vicar of the Seton Vicariate, which includes Frederick County.
Frederick-area parishes are responding to the growth in a variety of ways. From new buildings to new ministries, they’re analyzing data and laying the groundwork to meet the needs of current and future parishioners.
Rapid growth
Przybocki, St. Ignatius’ longtime business manager, was among the 400 families who built the parish’s new church in 2000 after outgrowing the country church, once St. Joseph’s mission. The new church’s original design included a large narthex, but archdiocesan officials advised them to add seating space instead.
By the time the 454-seat church was finished, it was already clear that more space would be necessary, but parishioners did not anticipate the parish would grow this quickly. In 14 years, St. Ignatius has expanded to more than 1,750 families.

The approximate location of parishes in southern Frederick County
Przybocki, 73, and the rest of St. Ignatius’ staff have struck a welcoming tone, juxtaposing the attitude of some other local denizens. A yellow sign along MD-80 in Monrovia proclaims “Stop Monrovia Town Center. Our neighborhood will change forever.”
About 4,100 homes are planned within a three-mile radius of the church within the next decade, said Father Michael J. Jendrek, St. Ignatius’ pastor. He expects the bulk of them to be completed within five years.
“The fields are starting to sprout construction vehicles,” he said.
According to 2010 census data, Frederick is Maryland’s fastest-growing county north of the Washington metro area. In 1970, it had 85,000 residents. By 2000, that number more than doubled to 195,000, and it grew to 233,000 by the 2010 census. State projections expect 100,000 more residents by 2040.
The largest demographic in that influx is 20 to 44-year-olds.
Little described Frederick as a longtime “cosmopolitan arena” with most residents connected to Baltimore or Washington. The rise in biotech firms keeps more Montgomery and southern Frederick County residents near home. The population influx includes emigrants from Africa, Asia, and Central and South America.
Established in 1763, St. John the Evangelist in downtown Frederick was the area’s first Catholic parish and continues to draw new members – sometimes as many as 30 families a month, said its pastor Father J. Kevin Farmer. It has more than 4,100 families and little parking, a problem the parish may have to address in the future.
In Ijamsville, St. Ignatius is completing a master plan to address campus and pastoral needs, but the plan is not yet public.
Insufficient parking, restroom facilities and volunteers for its booming faith formation program are among the challenges the parish faces. The parish is also short on cemetery space, but Father Jendrek said the parish doesn’t have many funerals, nor weddings.
What the parish does have are lots of baptisms – no less than 65 per year, he said. It offers four Masses each weekend.
Some parishioners still commute to Washington, and the parish accommodates their schedules, starting meetings no earlier than 7:30 p.m. and staggering youth faith formation classes on different nights. Other new ministries include outreaches to those who are divorced or widowed, and families whose loved one has recently died.
Outreach opportunities
When Father Lawrence K. Frazier became pastor of St. Joseph-on-Carrollton Manor 16 years ago, it was a small country parish with 250 families. It now has more than 900 families, including young professionals and residents of a nearby retirement community. Its new church was built with seating for 500, but new wings could be added in the future to allow for more.
St. Joseph is ideally located for growth – and evangelization opportunities, Father Frazier said. Other parish leaders are on board with his vision.
“What young families are looking for is a sense of mission that provides services at their level of need,” said St. Joseph Deacon Gregory Rausch. “If we can fulfill them spiritually … then they’re going to come.”
Chris and Sara Chaves joined St. Joseph in 2010 after leaving Germantown to buy a house in Point of Rocks, 13 miles southwest of Frederick. They parish-shopped, they said, but chose St. Joseph after Father Frazier sought out their new faces to welcome them. When they joined, he sent them a handwritten note, which underscored the warmth they felt from parishioners.
“We came here and felt at home,” Sara Chaves said.
Chris, 28, is an usher, and Sara, 27, sang in the choir until the birth of their son, Leonidas, now 3 months old.
Sara’s mother, Rosario Campos, also joined the parish two years ago after moving to the area from New Mexico, and is working to establish stronger ministries to Spanish-speaking Catholics.
More parishioners are living and working in the Frederick area, with proportionally fewer commuting to Washington, Deacon Rausch said. Because of the influx of businesses, housing prices in Frederick have increased, pushing people in search of the lower home prices recently found in Frederick even farther west.
The parish of St. Mary and St. Francis of Assisi, which has churches in Petersville and Brunswick, has yet to have a rush of new parishioners, but expects one as housing developments underway in Brunswick are completed, said Faye Williams, the parish’s business manager. Northwest of Frederick, Holy Family Catholic Community in Middletown doubled in the past decade, but growth seems to have currently leveled off, said Jean Rhoades, its office manager.
Diverse needs
The growth is projected to continue along main arteries leading north and northwest from Frederick, Little said. New homes and retail have sprung up in Walkersville, north of Frederick on MD-15 and home to St. Timothy, priming it to become another bedroom community, he said. Dawn Hawes, St. Timothy’s office manager, said the parish has grown only slightly, but it has seen a “small surge” in parishioners from Central and South America.
Frederick-area parishes collaborate to meet the community’s expanding needs, said Father Keith W. Boisvert, pastor of St. Katharine, which has become a hub for Frederick’s growing African community. The African outreach is one of several new parish initiatives, including a group for senior citizens and faith formation for young people who have learning disabilities.
St. Katharine formed in 1998 with about 200 members when it became clear that St. John the Evangelist in downtown Frederick would not be sufficient for the anticipated population growth. St. Katharine initially met at Frederick Community College, but moved worship to St. John’s Regional School gymnasium after the grade school’s new campus was completed in 2005.
Now 1,000 people attend weekend Masses.
The anticipated church is designed to seat 700, but, like St. Joseph, could expand. After eight years of setting up and tearing down 450 chairs for weekend Masses, parishioners – and their pastor – are eager to be in the new space.
“They can’t wait,” Father Boisvert said.
Also see:
Archbishop Lori dedicates new church for 200-year-old Buckeystown parish
Four new deacons ready to serve Baltimore
Hew to Canon Law when closing churches, Cardinal Burke says
PrevNext