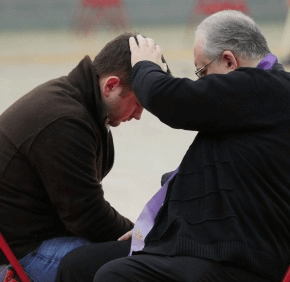 By Erik Zygmont
ezygmont@CatholicReview.org
It seems as if every Catholic has a metaphor for the sacrament of reconciliation.
“It’s kind of like checking the oil in your car,” said David Ellrod, a parishioner of St. Agnes, Catonsville. “I just operate better having gone frequently.”
Father Donald Calloway, a featured speaker at the March 14 Catholic Men’s Fellowship Conference, likened it to a ritual that new parents perform every day.
“No baby goes for a diaper change once a year,” he said, encouraging his audience to receive the sacrament often.
Skip Coale, who attends Mass at St. Louis, Clarksville, was a little more literal.
“I look at confession as a guaranteed encounter with Christ’s mercy,” he said. “I feel a monumental lifting of the burden when I go.”
With its special program, “The Light is on for You,” the Archdiocese of Baltimore hopes more Catholics will avail themselves of that mercy this Lenten season. On March 27, parishes will offer the sacrament 3-8 p.m. Parishioners should contact their local parishes to confirm availability.
The Light is on for You, which originated in the Archdiocese of Washington, spread to the Archdiocese of Baltimore in 2009.
“It just caught on,” said John Romanowsky, executive director of evangelization for the Baltimore archdiocese.
Romanowsky noted that generally, reconciliation is offered for an hour on Saturday afternoons. The short window corresponds to low demand for the sacrament, he acknowledged, but added that the lack of availability can contribute to a “vicious circle” by dissuading Catholics from seeking out the sacrament.
“The Light is on for You exists not just to make (reconciliation) available across the archdiocese,” he said, “but also to really just shout from the rooftops, to let everybody know that no matter how long you’ve been away, it’s available during Lent and leading up to Easter.”
The program is a way to reach out to those who haven’t been to the sacrament in a long time and invite them back, Romanowsky added.
Seminarian Lee Benson, in his second year at Mount St. Mary’s Seminary in Emmitsburg, emphasized that Catholics are always welcomed back.
“I think of the parable of the prodigal son,” Benson said. “You’re thinking, ‘There’s no way the father will accept me back.’ He not only welcomes you back, he throws a party for you.”
“He rejoices much more in forgiveness than in punishment,” Benson added.
Romanowsky noted that forgiveness and mercy are especially prominent at the moment for Catholics, given Pope Francis’ March 13 declaration that 2016 will be a Holy Year of Mercy, from this year’s Solemnity of the Immaculate Conception, Dec. 8, to the Solemnity of Our Lord Jesus Christ, King of the Universe, Nov. 20, 2016.
Also see:
In Holy Year, pope wants to share experience of mercy he had as a teen
Lenten dinners bring families closer together
What the saints say about confession
PrevNext