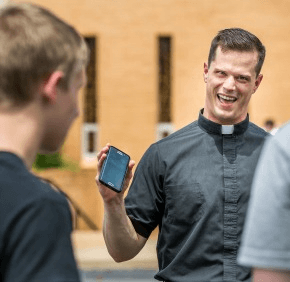 By Erik Zygmont
ezygmont@CatholicReview.org
Twitter @ReviewErik
“An opportunity that’s sitting right in front of us,” is the way Father T. Austin Murphy Jr., pastor of Our Lady of Hope in Dundalk and St. Luke in Edgemere, described the interactive video game Pokémon GO.
“We’ve done no work to earn it … so it’s like grace,” he said in an interactive webinar on “Pokévangelization” held by the Archdiocese of Baltimore.
As host of the Aug. 4 webinar, William Glover, chief information officer and director of the archdiocesan division of information technology, said that he couldn’t take credit for the clever portmanteau.
“The first place I saw it was in the Diocese of Green Bay,” he said.
The webinar offered parish and school staff firstly an overview of the interactive video game Pokémon GO – in which players hunt for colorful creatures (Pokémon), train them, and back them in G-rated “battles” with other players’ Pokémon.
The game is played on foot, using a mobile device such as an iPhone or Samsung Galaxy. PokéStops – places to virtually obtain Pokémon items – are located at well-trafficked areas, including parish campuses, as reported by the Catholic Review in a July 18 article, “Pokémon GO craze catches local churches by surprise.”
Father Murphy told webinar participants that soon after he discovered two PokéStops – places to virtually obtain Pokémon items – at Our Lady of Hope, an unidentified player walked up to him with a message:
“You’re going to get a lot of traffic.”
This was after the priest had been jokingly accused of cheating, as he happened to be sitting in his car taking stock of the game rather than on foot playing it.
He emphasized to webinar participants that he and his staff are avoiding the approach of tackling phone-toting passerby and dragging them to a sign-up binder for religious education or Rite of Christian Initiation of Adults.
A brief visit with one man and his young son, Father Murphy said, was simply “an opportunity for them to have a positive encounter with a minister of the church.”
He has also posted a sign at Our Lady of Hope, welcoming players and offering contact information for them to text or email a prayer request if they so choose.
As reported by the Catholic Review, some parishes have taken similar measures, including St. Frances de Chantal in Pasadena.
The webinar, however, revealed the results of an archdiocesan poll finding that 95 percent of parishes and schools are currently doing nothing.
Like Father Murphy, Sean Caine, executive director of communications for the archdiocese, emphasized that early evangelization through Pokémon GO is “a matter of welcome.”
“We’re talking to people who really aren’t there for the reasons we’re trying to engage them,” he said.
Joe Liberto, technology manager at St. Joseph in Cockeysville, echoed Caine:
“We’re not overtly evangelizing people; we’re just reinforcing that they’re welcome on the property,” he said.
Tom Alban, risk manager for the archdiocesan division of fiscal services, emphasized that parishes and schools that invite players onto their property “have heightened or made greater (their) obligation or duty to those individuals coming onto the property relative to ensuring their safety.”
Keeping parish facilities in good repair and well-lit, he said, is imperative.
For both parishes using the game to evangelize, and those who wish to ignore it despite having PokéStops on their properties, “the key consideration,” according to Alban, is “to proactively manage this phenomenon and the process.”
He suggested that parishes post specific hours that players are welcome, as well as any restricted areas where players are not to go. Parishes that don’t wish to participate, he said, should clearly post their properties as private – for parish and school uses only.
“Make sure,” he added, “that all your staff understand and at least acknowledge they know what the game is about and have a clearly delineated approach for your parish or your school on how you’re going to manage it.”
Inviting walking traffic is not the only way for parishes tap into the Pokémon GO buzz.
Glover said that soon after a priest had queried him about the game (“What is going on with this whole Pokémon GO thing?”), he managed to work it into his homily.
Three families approached the priest after Mass, Glover related, including a father who had never seen his children so attentive in that situation.
Father Murphy advised caution when “preaching anything pop culture-related.”
“We run the risk of preaching the gimmick,” he said. “It’s like telling a joke to get people’s attention. You can tell it, but after you get their attention, what are you telling them of significance?”

Open Window: What if I approached my faith like a game of Pokémon GO?