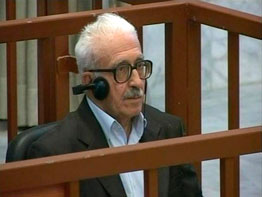 ROME – An Iraqi archbishop said justice should be served, but no death sentence should be handed down to eight defendants facing charges of genocide in Iraq.

Among those being tried is a Chaldean Catholic, Tariq Aziz, who served as deputy prime minister during former President Saddam Hussein’s regime. Aziz has been in U.S. custody for the past five years.

Chaldean Archbishop Louis Sako of Kirkuk reminded people of the need for “justice, but in respect for human rights and the dignity of the person,” which precludes “any capital sentence,” according to the Rome-based missionary news agency AsiaNews.

The archbishop issued his April 29 appeal the same day the trial opened in Baghdad.

No formal charges were read and the court quickly adjourned until May 20 because one defendant was unable to be present due to illness.

Aziz, 72, is accused of the 1992 execution of dozens of store merchants declared guilty of hiking food prices and breaking state cost controls during a time the country was under strict U.N. sanctions levied after Iraq invaded Kuwait in 1990.

Aziz, being the only high-ranking Christian in Saddam’s administration, had often been held up as an example of the tolerance or respect Christians experienced during the dictator’s rule.

But in a 2003 interview with AsiaNews, Latin-rite Archbishop Jean Sleiman of Baghdad said “Tariq Aziz was not prime minister because he was Christian, but because he was a great childhood friend of Saddam.

“He had participated in several massacres with him in their first years of action and had contributed to the Baath Party’s rise to power,” Archbishop Sleiman had said.

All eight defendants will be tried by the Iraqi High Tribunal for war crimes, genocide and crimes against humanity, according to news reports.

Human Rights Watch has called on the tribunal to conduct a fair trial in order to bring about real justice.

In 2006, the Iraqi court sentenced Saddam to death by hanging, and he was executed Dec. 30 of that year.