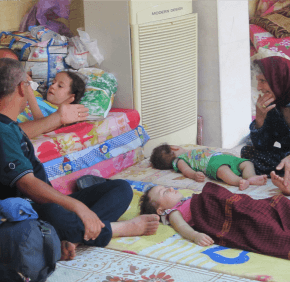 Courtesy Archdiocese of Baltimore
Archbishop William E. Lori is inviting Catholics in the Archdiocese of Baltimore and all people of good will to join him in praying for peace in Iraq at an interfaith and ecumenical prayer service Aug. 24 at 2 p.m. at the Basilica of the National Shrine of the Assumption of the Blessed Virgin Mary in Baltimore. The archbishop has also invited ecumenical and inter-religious faith leaders and their communities to participate in the prayer service.
On Aug. 10, Pope Francis, speaking to the crowds assembled in St. Peter’s Square, denounced the sectarian violence that has driven thousands of people in Iraq, many Christians, “from their homes in a brutal manner; children dying of thirst and hunger in their flight; women taken and carried off; violence of every kind; destruction of historical, cultural, and religious patrimonies. All this gravely offends God and humanity. Hatred is not to be carried out in the name of God!”
Archbishop Lori is also inviting members of the archdiocese’s institutions and organizations to attend the prayer service, which will include a collection for humanitarian efforts being led in Iraq by Catholic Relief Services, and is calling area Catholics to a day of prayer and fasting on Aug. 23 as a sign of solidarity with the people of Iraq.
“People are suffering greatly because they believe as we believe,” the archbishop said. “Just as Pope Francis is seeking to show his closeness to those who are suffering in Iraq, so too can we support our Christian sisters and brothers by giving of ourselves and by our prayers.”
Also see:
As Ebola deaths rise in Ghana, bishops urge screenings at seaports
Vatican opens gardens of summer villa #video
Cristo Rey Jesuit president announces resignation
Lotto-winning philanthropist dies at 65
PrevNext