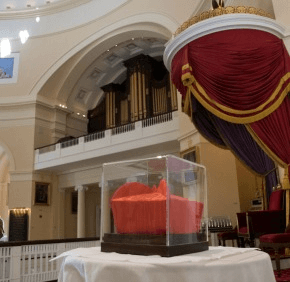 |
Hours after the death of Cardinal William H. Keeler, 14th archbishop of Baltimore, Archbishop William E. Lori praised the legacy established by the cardinal, who died early in the morning of March 23 at St. Martin’s Home for the Aged in Catonsville at 86.

“In many ways, it makes my job easier, because he left such solid foundations,” Archbishop Lori said at a March 23 press conference at the Basilica of the National Shrine of the Assumption of the Blessed Virgin Mary in Baltimore. “But he also made it harder, because it is a high bar.”

The archbishop was a young priest of the Archdiocese of Washington when he first met Cardinal Keeler, who was then a young bishop of the Diocese of Harrisburg, Pa.

Archbishop William E. Lori shares his memories of Cardinal William H. Keeler during a March 23 press conference at the Basilica of the National Shrine of the Assumption of the Blessed Virgin Mary in Baltimore. (Kevin J. Parks/CR Staff)

Serving as priest secretary to the late Cardinal James A. Hickey, then in the first half of his tenure as archbishop of Washington, a position he held from 1980 to 2000, Archbishop Lori accompanied his boss to visit Cardinal Keeler in Harrisburg.

“I was just taken by his energy – he was just a ball of energy – and his ability to remember things and recall things,” Archbishop Lori recalled.

Later, as the Baltimore Basilica was undergoing extensive renovations under Cardinal Keeler’s watch, there were various celebrations, and “I was lucky enough to go to those things as Cardinal Hickey’s sidekick,” the archbishop added.

“That was where I discovered (Cardinal Keeler’s) prowess as a historian,” he said.

Archbishop Lori cited the renovation of the basilica, America’s first cathedral, as one of Cardinal Keeler’s major accomplishments, and the cardinal’s love for history as a critical component of his great success in the undertaking.

“If Benjamin Henry Latrobe were to walk into this basilica today, he would recognize his genius, his handiwork,” Archbishop Lori said, referencing the famed architect who had a major hand in designing the U.S. Capitol as well as the basilica.

“What (Cardinal Keeler) has really done is to help us recapture, in the genius of this architecture and the beauty of this church, our heritage,” the archbishop said. “And if we love our heritage and we are secure in our heritage, we can move forward.”

He smiled as he remembered his own worries over a “big crack in the dome” that resulted from the earthquake that hit the Mid-Atlantic region in 2011, the year before he was appointed archbishop.

They were for naught, it turned out, thanks to an unusual instance of foresight.

“Who takes out earthquake insurance in the Middle Atlantic region?” Archbishop Lori said, eliciting chuckles from the media. “He did it, so we were able to not only get that fixed but to put a little stabilization in the building, and put it back exactly as it was.”

He went on to refer to the following Easter Sunday – when Cardinal Keeler, then archbishop emeritus of Baltimore, was well enough to preside at Mass at the newly “re-renovated” basilica and receive a “thunderous ovation”  – as “one of the happy moments in my time here.”

Archbishop Lori also highlighted the cardinal’s ecumenical and interfaith work, noting Ecumenical Patriarch Bartholomew of Constantinople’s 1998 visit to Baltimore as well as the cardinal’s enduring relationship with the Jewish community.

Archbishop Lori characterized the latter as “a legacy of love and friendship,” but also “a legacy of operating for the common good, whether it’s education, or social services” or the city of Baltimore itself.

When he became a member of the board of governors of the Maryland Catholic Conference, the Annapolis-based legislative lobbying arm of the Maryland bishops, Archbishop Lori again crossed Cardinal Keeler’s path.

“There I saw how well and wisely he dealt with the public realm,” the archbishop recalled, musing that the cardinal was, without being aware of it, “kind of giving me an apprenticeship for this job.”

“It was beyond my wildest dreams that I would ever come here as archbishop, but so many times I have thought back to how the cardinal handled different situations, and he was masterful, and he was wise,” he added.

“I think that is so appropriate,” Archbishop Lori said. “Cardinal Keeler is a church leader with the stature of a Cardinal Gibbons, or a Carroll.”

Bishop Parker recalled that Cardinal Keeler had a special relationship with the youth of the archdiocese, establishing the annual Youth and Young Adult Pilgrimage, in which young people from throughout the archdiocese display their faith by carrying a cross through Baltimore City on Palm Sunday weekend.

“He found that by interacting with the young people of the archdiocese, he personally was enlivened in his own faith,” Bishop Parker said.

“I think one of the things especially young people took away from (Cardinal Keeler) was his authenticity,” Bishop Madden observed. “He truly loved the church.”

The bishop added that the cardinal “had a great love for the poor” and was “instrumental in so many ways in getting programs together to help the poor.”

“No matter what, he always remained kind and a gentleman,” Bishop Madden added. “He could disagree with you on something but he never became antagonistic. … He had so many genuinely good virtues.”