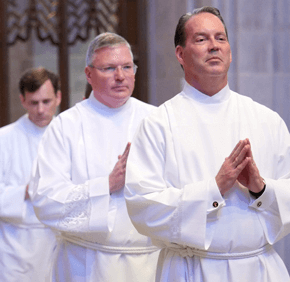 Deacons Ray Van Pelt
By George P. Matysek Jr.
gmatysek@CatholicReview.org
Twitter: @ReviewMatysek
Lying face down on the hard sanctuary floor of the Cathedral of Mary Our Queen in Homeland, May 16, eight white-robed men remained motionless as more than 1,000 people called on the heavenly saints to intercede for them.
“Pray for us,” the congregation repeatedly chanted in solemn unison, after a cantor invoked the names of holy men and women from two millennia of Christianity.
Strengthened by the power of prayer, the prostrated men stood and approached a seated Archbishop William E. Lori.
After four years of intense study, formation and pastoral ministry, this was the moment for which they had been preparing: ordination to the permanent diaconate.

In an ancient gesture, the archbishop laid his hands on their bowed heads – silently conferring the gift of the Holy Spirit. He offered a prayer of ordination, asking God to dedicate each man to the service of the church.
With the conferral of the sacrament of holy orders, the new deacons were created.
The Archdiocese of Baltimore’s newest clergymen include Deacon James M. Cyr of St. Ignatius of Loyola in Ijamsville; Deacon Carlos Dutan of the Catholic Community of Glen Burnie; Deacon Daniel O’Neill Kennedy of St. Peter the Apostle in Libertytown and Deacon James Robert Longenecker of St. Ignatius in Hickory.
Also ordained were Deacon Paul A. Nicholas of St. Ann in Hagerstown; Deacon Robert R. Price of St. Ignatius of Loyola in Ijamsville; Deacon Raymond T. Van Pelt III of St. Ignatius in Hickory and Deacon Francis W. Ziegler of St. Louis in Clarksville.

“The permanent change wrought in you by diaconal ordination not only authorizes you to minister as deacons,” Archbishop Lori said in his homily, “but will remain as an inner conduit for the strength and grace you need to serve as Jesus did, generously and lovingly.”

The archbishop said it is important for the new deacons to keep that channel of grace “wide open” through meditation, prayerful reading of the Bible, spiritual direction and the “frequent and worthy reception of the sacrament of penance.”
“Growth in friendship with Jesus means you will fulfill your ministry not in a minimal and grudging way,” Archbishop Lori said, “but in a free and wholehearted way.”
During the more than two-hour liturgy, the deacon candidates placed their hands in those of Archbishop Lori, promising respect and obedience to the archbishop and his successors. After their ordination, they were vested in stoles and dalmatics, the liturgical garments of their office. The archbishop handed each new deacon a book of the Gospels and offered each a fraternal kiss, a gesture that was repeated by more than 50 other deacons.
The archbishop, who was joined at the liturgy by Bishop Denis J. Madden, Bishop William C. Newman and approximately 40 priests, said the deacon’s ministry is made up of word, sacrament and charity.
The new deacons will proclaim the Gospel at Mass, preach homilies, assist at the altar, lead general intercessions and distribute Communion. They will administer the sacrament of baptism, witness marriages and preside at rites of Christian burial. They will also minister in the wider community at hospitals, nursing homes and elsewhere.
Following the liturgy, Deacon Nicholas likened the day to his marriage to his wife, Heather.
“It’s one of those things where you are excited and, at the same time, you’re incredibly nervous because you really don’t know what you’re getting into,” Deacon Nicholas said.
Mobbed by friends and family who kissed and hugged him after his ordination, Deacon Dutan said he was overwhelmed by support. The most spiritually-moving part of the liturgy was lying prostrate in the sanctuary, he said.
“I completely felt the Holy Spirit upon me,” he said, “and the blessing that came down upon all of us.”
The Spanish-speaking deacon, who has Ecuadorian heritage, said he was eager to begin ministry to the Spanish-speaking community.
“It’s not just speaking the language,” he said, “but also knowing the community and understanding their culture. This is one of the biggest jobs I’m going to undertake, and, with the help of God, I’m going to do the best I can.”
Deacon Dutan’s wife, Nancy, said she was in tears as she watched her husband’s ordination, especially listening to the words of the Communion hymn, “Donde Hay Amor y Caridad,” “Where Charity and Love Abound.”
“I had tears of happiness and tears of joy,” she said.
During the ordination, Deacon Price found himself repeatedly drawn to a large stained glass window near the sanctuary that depicts the crucified Christ.
“Looking up and seeing those words (on the stained glass), ‘Into your hands, I commend my Spirit,’” was pretty powerful,” he said.
Deacon Cyr described the entire day as “surreal.”
“It’s very humbling to be here and to be able to do this,” he said. His wife, Jennelle, added that their family members have always made God a part of their lives and will continue to go where God leads them.
“I think I’m still wrapping my head around the idea that my husband’s been called (to the diaconate),” she said. “That’s pretty overwhelming.”
The new deacons come from a variety of backgrounds, including a small business owner, a software engineer, a corporate forensic investigator and a program manager for the U.S. Army.
At the end of the liturgy, Archbishop Lori announced the pastoral assignments for the new deacons.