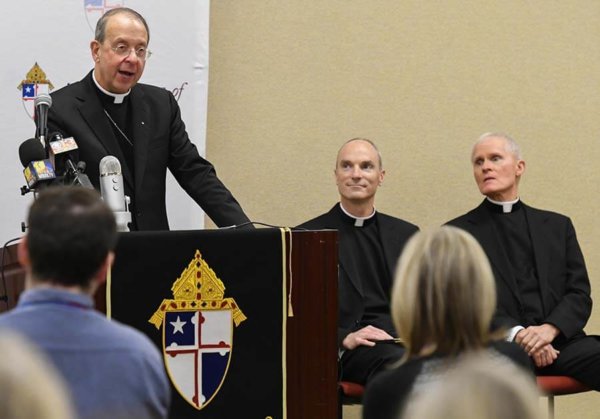 Archbishop William E. Lori introduces new auxiliary bishops for the Archdiocese of Baltimore during a Dec. 5 news conference at the Catholic Center in Baltimore. (Kevin J. Parks/CR Staff)
Monsignors Adam J. Parker and Mark E. Brennan, who will serve the Archdiocese of Baltimore as auxiliary bishops, met the public as bishops-designate for the first time Dec. 5, first at a morning press conference and then at mid-day Mass at the Basilica of the National Shrine of the Assumption of the Blessed Virgin Mary in Baltimore.

“This is truly a joyous day in the life of the Archdiocese of Baltimore,” Baltimore Archbishop William E. Lori said at the press conference at the Catholic Center, in Baltimore, as he introduced the two men.

Bishop-designate Parker, who has served as vicar general and moderator of the curia for the archdiocese since 2014, acknowledged that substantial chatter had preceded his appointment.

“Well, my friends, it just goes to show – sometimes the rumors are actually true,” he said.

He expressed joy in the fact that, as a bishop, he will serve as a successor to the Apostles, who, he noted, were not chosen for their intellect or other earthly skills.

“They were simple men with sincere hearts, willing to follow wherever the Lord would lead them,” he said, adding that they took to heart Christ’s final exhortation to “go make disciples,” a phrase he will adopt as his motto as bishop.

Bishop-designate Parker said that he would be “accompanying people where they are,” per Pope Francis’ wishes, and he asked all to accompany him as well.

“That is my hope; that is my prayer; that is my request, for you today,” Bishop-designate Parker said at the press conference, at which were many Catholic Center staff who have worked with him.

Bishop-designate Brennan, who will turn 70 Feb. 6, said that he had been expecting to finish his ministry as a pastor, St. Martin of Tours in Gaithersburg, a parish of the Archdiocese of Washington.

“Pope Francis is a little different, as you might have gathered,” he said. “All I can say is, when I was asked to be a bishop – I’ve always tried to do for the church what was asked of me.”

As pastor of a parish with a large number of immigrants, Bishop-designate Brennan said that he has “a special regard and love for our immigrants from Latin America in particular, but from other parts of the world as well.”

He noted that St. Martin, which also serves many recent African immigrants, began offering a Sunday Mass in French “because I was hearing confessions and acts of contrition in French, which I had learned in high school.”

The bishop-designate was the Washington Archdiocese’s vocations director in the 1990s, and he noted that the Baltimore Archdiocese’s work in that area – Quo Vadis vocations camp, for example – is solid.

“The most important thing really is prayer and confidence in the Lord,” he said. “We don’t need huge numbers of priests; we just need enough.”

Archbishop Lori noted at the press conference that the Vatican had officially accepted the resignation of Bishop Denis J. Madden, auxiliary bishop of Baltimore.

“I have known Bishop Madden since before I came to Baltimore,” the archbishop said, “and since I’ve been here these past four-and-a-half years, I have really seen first-hand, time and time again, what a good, loving pastoral heart is supposed to look like.”

He added that Bishop Madden will still be around:

“Sort of the way I’m looking at this is, as long as he’s taking his One-a-Day vitamin tablets, and as long as he’s eating his Wheaties for breakfast, I see no reason why he should not continue to serve the Archdiocese of Baltimore, especially our urban parishes, with that same love and dedication and skill that he has always manifested.”

“We’re looking at that right now,” the archbishop replied, mentioning that the archdiocese continues the pastoral planning process that he announced with his 2015 pastoral letter, “A Light Brightly Visible: Lighting the Path to Missionary Discipleship,” and began in earnest this year.

After the press conference, the bishop-designates concelebrated Mass with the archbishop, as well as Bishop Madden, in the Basilica undercroft. Also concelebrating were Monsignor James W. Hannon and Father William Foley of the archdiocesan office of clergy personnel.

In his homily, Archbishop Lori noted that Advent is a season of waiting.

“I guess you might say the Archdiocese of Baltimore has been going through a very long Advent, as it has waited nearly two years for bishops to be appointed,” he said. “Let me say – it was worth the wait.”

The Gospel reading, Luke 5:17-26, which told the story of men lowering their paralyzed friend through the roof to meet and be healed by Jesus, illustrated the work ahead for Bishops-designate Brennan and Parker, the archbishop said, noting that the men in the Gospel were so moved by Jesus that they took extraordinary measures to put their friend before him.

“Perhaps, your greatest service, in the fullness of the priesthood,” the archbishop said, “is to encourage, to inspire, to lead and to sanctify many priests and deacons and religious and seminarians and above all lay men and women, so that they can be those people, whose faith is so great, and so alive that they are constantly bringing people to Jesus, especially those people who think that they are stymied, and blocked and obstructed in their relationship with Christ and in their relationship with the church, and others.”

For more photos from the news conference and Mass, visit our Smugmug page.

For video highlights from the press conference, click here.