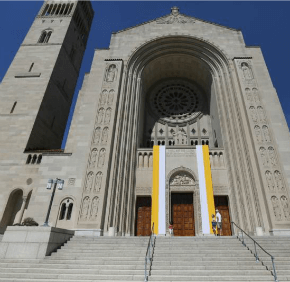 Archbishop William E. Lori wants everyone in the Archdiocese of Baltimore to participate in the upcoming visit of Pope Francis to the U.S.

“I certainly hope that if you can’t go to Philadelphia or see him in Washington, you’ll come to the Mass in the Grass and other types of events, to be able to take part in what I think is a grace-filled event,” he said.

The Mass in the Grass will be a live telecast on the lawn of the Cathedral of Mary Our Queen in Homeland of the Sept. 27 Mass in Philadelphia. Other parishes will offer viewing parties that day as well as service events the week the pope makes his first pastoral visit to this country.

The archbishop will attend several events with the pope in Washington, D.C., and Philadelphia.

He will be among the delegation of bishops who welcome him when he arrives Sept. 22 at Joint Base Andrews in Prince George’s County. Pope Francis will address the U.S. bishops Sept. 23 at St. Matthew’s Cathedral in Washington, and Archbishop Lori will also attend the canonization Mass for Blessed Junipero Serra at the Basilica of the National Shrine of the Immaculate Conception in Washington later that day.

In Philadelphia, he will attend another gathering of bishops, including bishops from around the world who are attending the World Meeting of Families. The archbishop, who chairs the U.S. bishops’ Ad Hoc Committee on Religious Liberty, will be at Independence Hall, home of the Liberty Bell, when Pope Francis presents a talk on religious liberty. He also will attend the closing Mass for the World Meeting of Families Sept. 27 in Philadelphia’s Center City.

Archbishop Lori doesn’t know for certain what the pope will say on his visit, but he imagines that Pope Francis will address the environment, immigration and “capitalism of the heart.”

“I don’t think he’ll tell us not to be capitalists, but (to be) capitalists who are not only just but very charitable,” he said. On religious persecution, he thinks the pope will “tell us to protect our freedoms and to use them to serve the poor and the needy.”

He said that any papal visit “gives a kind of bump” to the church’s mission of evangelization. “I think the pope will come in such a loving and pastoral way that everyone will open their hearts to him.”

Archbishop Lori said he hopes people prepare for the visit by praying for Pope Francis and asking for the grace to hear his message. He also wants people to be sure to hear what the pope has to say directly, either in person or via media broadcasts, so they can “hear the pope speak in an unfiltered way … not what somebody says about him.” Even the best reporting or commentary cannot replace hearing the pope himself speak “because he speaks plainly, directly to all of us.”

Although the pope will speak often in his native language of Spanish, Archbishop Lori thinks broadcasts may feature subtitles or translations, so that “we’ll all get what he’s saying.”

For those who are fortunate enough to have tickets to a papal event or who plan to attend the Mass in Philadelphia or see the pope in a parade around the Ellipse in Washington or on the West Lawn of the Capitol, the archbishop said he is praying that “all will travel in safety and joy,” without too many logistical challenges. “I just pray that it will be a very joyful time.”