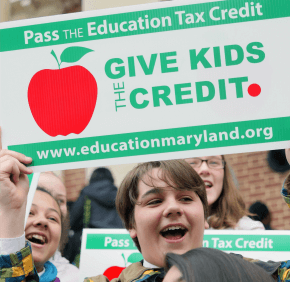 By Erik Zygmont
ezygmont@CatholicReview.org
ANNAPOLIS – Combining real-life activism with a lesson in civics, private and Catholic school students from across the state rallied in Annapolis March 4 to support the Maryland Education Credit, a bill that would give a substantial tax credit to businesses that donate to organizations supporting both public and nonpublic education.
“I know you’d rather be in class, but here we are today,” said Archbishop William E. Lori, addressing a Miller Senate Office Building function room packed with students, including those from nearly a dozen Archdiocese of Baltimore Catholic schools.
Archbishop Lori referenced the recent changing of the guard in Annapolis, including the newly elected Gov. Lawrence Hogan Jr., his new administration and about 70 newly elected members of the General Assembly.
“With all of that, Maryland’s nonpublic school community is energized,” Archbishop Lori said. “We are ready for Maryland to give kids the credit.”
Related article: Gov. Hogan throws his support behind business tax credit
The Maryland Education Credit, which has passed the State Senate in previous years and is in committee in the House of Delegates, would allow businesses donating to nonprofit “student assistance organizations” to claim a tax credit equal to 60 percent of their donation, up to $200,000. The student assistance organizations then forward those contributions – in the form of tuition assistance, tutoring, supplies and other assistance – to nonpublic and public school students.
Per the bill, nonpublic school students receiving assistance must attend a school with a tuition lower than the state per-pupil cost for public schools, which was more than $14,100 as of the 2010-11 school year.
“Why in the world wouldn’t we want to encourage voluntary contributions – more investment – in our schools?” said Hogan, also addressing the students. “Who could be against that? It’s in everyone’s best interest.” ​
The bill has appeared before the General Assembly for several consecutive years, but has not emerged from committee in the House.
“Speaker Busch needs to allow a vote,” Hogan said.
Archbishop Lori touted the bill’s potential to “increase enrollment and make our schools more affordable,” which he said is especially critical to inner-city private and Catholic schools because they “are often anchors in their communities.”
Maryland’s Catholic high schools, continued the archbishop, graduate 99 percent of their students from high school and get 98 percent of them into college, thanks in part to SAT scores 100 points higher than the state average.
“We’re pretty proud of you,” Archbishop Lori told the students.
Following the rally – which also included remarks from Rabbi Ariel Sadwin, president of the Maryland chapter of the Council for American Private Education; Maryland Senate President Thomas “Mike” Miller; Sen. Ed DeGrange, who has been the lead sponsor of the bill since 2006; and Del. James Proctor – students moved on to observe an in-progress legislative session and track down their representatives to garner support for the Maryland Education Credit.
A group of students from St. Casimir Catholic School of Baltimore met with newly elected Del. Brooke Lierman.
“It’s great to have you guys here,” Lierman said, describing her own Catholic elementary school years before asking the students if they had any questions about state government or the legislative process.
Seventh-grader Elise O’Leary got right to the point.
“Are you for the credit for kids?” she asked Lierman.
“I am still thinking about it,” said Lierman. “I understand the important role Catholic schools play in our education, but I worry that the bill as written could be ripe for abuse.”
“Just being totally honest, as all public servants should be with you,” she added.
Students participating in Model United Nations at The Seton Keough High School in Baltimore, accompanied by their coach and history teacher Kirk Marchand, approached Del. Antonio Hayes.
“We wanted to come to talk to you about the education bill,” said junior Madison Barnes. “We were hoping you would pass it.”
The students spoke with Hayes both about the Maryland Education Credit and the Nonpublic Aging School Program, which was cut from the state budget this year. Hayes did not express a commitment, but he handed out his cards and encouraged the girls to contact him in the future.
“I’ll be as up front as I can,” he said.
Also see:
Hogan’s budget includes textbook funding, but no money for aging schools
Meet the staff: CRMedia announces new hires
Fellow cleric remembers Father Purvey as ‘old-school’ priest
PrevNext