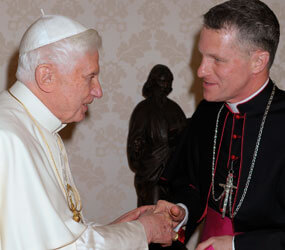 VATICAN CITY – The wars in Iraq and Afghanistan have taken a tremendous toll on members of the military and their families, said Archbishop Timothy P. Broglio of the U.S. Archdiocese for the Military Services, but military service also has strengthened the faith of many Catholics and even been a source of vocations.

“We will continue to see the effects of this war – Iraq and Afghanistan – on family life for many decades to come,” the archbishop told Catholic News Service Jan. 18.

The archbishop, who was making his first “ad limina” visit to the Vatican to report on the status of his archdiocese, met with Pope Benedict XVI Jan. 17 and said the pope asked him very specific questions about pastoral services to members of the military.

He said his meeting with the pope was “a very, very significant moment in which the Holy Father really dedicated himself completely to the reality of the Archdiocese for Military Services; he asked specifically about the situation in the war zones (and) he asked how we take care of such a vast area,” said Archbishop Broglio, whose priests and faithful are stationed around the globe.

Serving in the military and, especially the experience of “being in a war zone or being on a ship, is a moment that a Catholic asks significant questions and looks for responses,” he said. If there is access to a Catholic chaplain or well-trained lay leader nearby, “it can be a moment of tremendous growth. In other circumstances, it can be a moment of frustration, particularly if you’re in a small f.o.b. (forward operating base), you might not have much contact with a priest.”

For the families as well, “the role of the faith community at the time of deployment is very, very important because families have paid a tremendous price for these wars,” being separated from spouses and parents, having to take on more responsibility at home and then, upon their return, dealing with the struggles they may have readjusting.

“Almost anyone who has been deployed comes back certainly afflicted to some degree, to a lesser or a greater degree, by post-traumatic syndrome. If the individual is able to deal with this and reintegrate himself into his family life, then it doesn’t become a disorder, but if it persists,” both the returning military member and his or her family will need counseling and spiritual support, he said.

For the past three years, Archbishop Broglio has spent Christmas with the troops in the Middle East. He said he has been struck by how grateful the men and women are to have their archbishop spend the holiday with them. In December, he was in Kuwait, on the supercarrier USS John C. Stennis, and in Kyrgyzstan, the location of the transfer base for troops going in and out of Afghanistan.

Catholics in the military who are involved in chaplaincy activities “certainly become more articulate” Catholics, he said.

But the old saying that “there are no atheists in a foxhole,” he said, “has to be modified because there are those who question religious beliefs, even among the military.” In fact, some – “call them free thinkers, call them agnostics” – have asked for meeting facilities on military bases and even for chaplains, he said.

Archbishop Broglio said he was surprised that Pope Benedict did not ask him about how the archdiocese presents Catholic social teaching, particularly on justice and peace, in the unique context of the military.

“I have yet to meet anybody in the military who wants to be at war,” he said. “And I see the enormous toll that the longest war in U.S. history has had on the men and women I am privileged to serve.”

In addition, he said, the Catholic chaplains are “able counselors for men and women who have conscientious objections to what they might be asked to do.”

During the “ad limina” visits, the bishops meet with all the Vatican congregations and many of the pontifical councils. Some questions that come up in the meetings – for instance, relations with religious congregations resident in a diocese – don’t apply directly to the military archdiocese, Archbishop Broglio said. Others, such as vocations promotion and the preparation of seminarians are very relevant, he said, proudly claiming the military archdiocese “provides 10 percent of the vocations in the United States,” since 10 percent of the men ordained priests each year have served time in the U.S. military.

The military archdiocese does not have any of its own priests. Dioceses and religious orders release priests to serve as chaplains for a period of time. However, the military archdiocese does co-sponsor seminarians with other dioceses. Currently, he said, there are 28 co-sponsored seminarians who have agreed to go on active military duty after serving three years as a priest in their diocese.