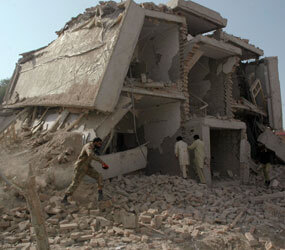 “Most of the scheduled programs are canceled due to this situation,” said Archbishop Lawrence Saldanha of Lahore. The celebrations will be more of a family affair with little “pomp and display outside,” he added.

“This will be a silent Christmas. We shall discover the meaning of Christmas in a quiet way and hope for the return of harmony and peace,” the archbishop told the Asian church news agency UCA News.

He spoke to UCA News Dec. 7, before two bomb blasts that evening ripped through a busy market in the center of Lahore, capital of Punjab province, killing at least 36 people.

A wave of deadly bombings has rocked the country since the Pakistani army launched an operation in mid-October against Taliban militants in neighboring North-West Frontier province, which borders Afghanistan.

A Dec. 7 blast outside a district courthouse in that province’s capital, Peshawar, killed at least 11 people and injured 44 others.

A catechist who did not wish to be named told UCA News that two Catholic churches in Peshawar, the city worst hit by militant attacks in Pakistan, have canceled Christmas celebrations.

“Masses will be conducted but not the traditional fairs. We are praying every day for the improvement of the situation and peace in the country,” he said.

The outdoor Christmas fair at the Cathedral of Sts. Peter and Paul in Faisalabad also has been called off.

“The annual diocesan choir event formerly attended by thousands in the open cathedral compound will now be limited only to the cathedral building,” said Father Khalid Rashid Asi, vicar general of the Faisalabad Diocese. “We are very cautious and all programs are being organized … on a low scale.”

On Dec. 4, an explosion at a mosque in Rawalpindi killed 40 people and injured 83 others. Rawalpindi houses the headquarters of the Pakistani army, and among those killed were high-ranking army officers.