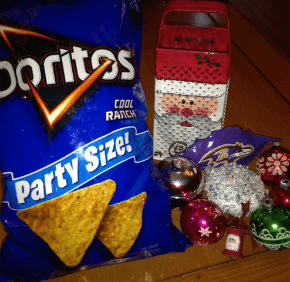 By Jennifer Williams
jwilliams@catholicreview.org
In 36 years of teaching at St. Thomas Aquinas School in Hampden, Susan Smith has received quite the variety of Christmas gifts from students.
But one that remains close to her heart, even after more than 20 years, is a handmade ornament one of her fifth-grade students crafted from a walnut shell.
“Inside the shell he had a little mouse made of clay covered with a blanket,” Smith said. “I still hang it on my tree each year.”
St. Michael the Archangel teacher Sue Dover can relate. Although she has appreciated all the gifts she has received in her 29 years with the Archdiocese of Baltimore, one she kept until it fell apart was a 10-inch Christmas tree on which her student had glued beads to the end of each branch.
“Over the years it was brought out, beads glued on, and then set on the table,” Dover said.
Teachers across the archdiocese say gifts they receive range from ornaments to Ravens memorabilia to gift cards.
Some aren’t even tangible, as Lisa Komondor, a fifth-grade teacher at St. Margaret School in Bel Air discovered.
“During my first year at St. Margaret, a student ‘gifted’ me with the Mercy High School Magic ‘teacher you are most thankful for’ recognition,” said Komondor, who has taught at public and Catholic schools for 22 years. “That was so humbling and so amazing.”
Other unique gifts she has received include a giant stuffed apple signed by her entire class, that read, “World’s Greatest Teacher,” a vase (chipped) wrapped in old newspaper with a hand-written note from a student who did not have much, and a garden statue of the Blessed Virgin Mary she received one year when the class had found out she moved into a new home.
During her early years of teaching, she received a gift of a spatula and baking supplies from her 12th-grade work-study students. Komondor said the students had asked what she liked doing best over Christmas break and she responded, “make Christmas cookies.”
“I know they all chipped in themselves and that it was all the students’ doing, not the parents,” she said.
Some gifts are comical. Smith said her students had asked her once what her favorite snack food was. She had answered, “Doritos,” so on Christmas she received several bags.
Ornaments are a big hit.
“I label and date the ornaments, and when it’s time to decorate my own tree, I take time to remember those students,” said Dover, who currently teaches second grade.
She said one of the most surprising gifts she received was a pilgrim with a broken leg.
“My surprise when I opened it was great, but the smile on the little guy’s face said how proud he was of bringing a gift,” Dover said. “Yep, that pilgrim stayed with the decorations for years.”
Komondor said she also puts ornaments on her tree from the first to the most recent year she has taught – and tries to remember each student.
While teachers say those gifts from the heart mean the most, they did take the time to offer some gift suggestions.
Here’s a Top Ten list for suggested Christmas gift items for teachers:
1.       Homemade cookies
2.       Handmade gifts from the family
3.       Wawa coffee or Starbucks gift cards
4.       Fancy hand sanitizers
5.       Children’s books
6.       Games for inside recess
7.       Gift card from a school store
8.       Ravens items
9.       Stickers
10.   Notes from students
** Teachers seem split on coffee mugs. One said “I don’t have a need for anymore,” while another said she likes unique coffee or drink cups. She has one she’s been using for eight years that says “Good Morning, Let the Stress Begin!”
Also see:
Hunger awareness campaign: Baltimore archbishop spends snowy Tuesday at Our Daily Bread
Five priests share their advice for slowing down in Advent
PrevNext