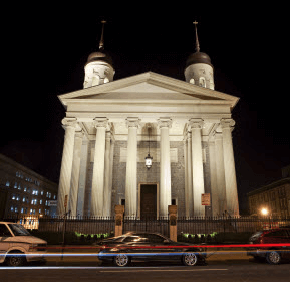 By Maria Wiering
mwiering@CatholicReview.org
Twitter: @ReviewWiering
Gov. Martin J. O’Malley signed into law May 2 a bill repealing the state’s death penalty, making Maryland the 18th state to outlaw capital punishment.
Mary Ellen Russell, executive director of the Maryland Catholic Conference, called the signing a “historic moment” in a May 2 statement.
The Maryland Catholic Conference has been a longtime advocate for death penalty repeal and is a coalition partner of Maryland Citizens Against State Executions.
The Archdiocese of Baltimore planned to illuminate the Basilica of the National Shrine of the Assumption of the Blessed Virgin Mary in Baltimore overnight May 2 to commemorate the legislation’s signing.
Chairman of the MCC, Archbishop William E. Lori testified in support of the legislation at hearings in the Maryland General Assembly’s Senate and House of Delegates.
Auxiliary Bishop Denis J. Madden served on the 2008 Maryland Commission on Capital Punishment, which recommended repeal to the Legislature.
“The Catholic Church teaches that a consistent ethic of life demands respect for the dignity of every human life, including those of criminals on death row,” the MCC said in a statement.
“The test of whether the death penalty can be used is not the gravity of the offense, but whether it is absolutely necessary to protect society,” it said. “Imposing a sentence of life without the possibility of parole is a sufficient means of protecting society without resorting to taking another life.”
The law does not commute the sentences of the five men sitting on death row in Maryland.
The Washington Post reports that the governor plans to deal with their cases “when they come to my desk,” but that he has not elaborated how he may address their sentences.
The repeal bill was one of more than 250 bills the governor signed into law May 2. The legislative session ended April 8. To read the Catholic News Service article, click here.
For more political news click here.
Copyright (c) May 2, 2013 CatholicReview.org
PrevNext