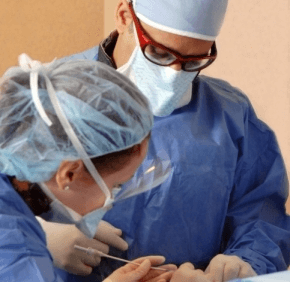 A frequently performed, often life saving heart procedure has taken a more comfortable turn for many patients who now no longer need suffer through a slow and often painful recovery period.

Traditional femoral cardiac catheterization, in which a long, thin, flexible tube called a catheter is inserted into a blood vessel in the groin and threaded to the heart, is now being replaced in many cases by a procedure that uses an artery in the arm. It is called trans-radial catheterization and is considered a more comfortable procedure for patients and has less risk of bleeding at the access site – especially important for patients who have other medical conditions, such as bleeding disorders, obesity or peripheral arterial disease.

“It’s a quality of life issue because (unlike the traditional method) the patient has immediate physical function and is in a much better emotional state,” Sura said, noting that the procedure can be less expensive because of the shorter hospital recovery time.

Although the trans-radial procedure is prevalent in Europe, Japan and India and has been used there for quite a few years, only recently has it begun to be accepted by cardiologists in this country.

Some U.S. doctors believe the reason for the relative infrequency of trans-radial procedures is probably due to a difficult to overcome engrained inertia to change.

Sura, who has already performed approximately 500 trans-radial catheterizations, acknowledged that the U.S. has been slow to adopt the safer, more comfortable and cheaper approach. However, he said that as more cardiologists are trained in using it, it should soon become the procedure of choice in appropriate patients.

“I think it’s fantastic,” Sura said, “but it doesn’t close off other avenues. If it doesn’t work for some reason we can still do the femoral approach.”

The feedback he has received from trans-radial patients has been “excellent.”

Patients were at first surprised to learn about the technique, he said, “but now they ask for it.”

Sura said a lot of people who had the femoral procedure didn’t like it. The recovery was very difficult for them.
He suggested that in instances in which patients are not offered the trans-radial procedure they should ask their doctors about it to discover whether it might be appropriate for their conditions.

“It took a while, but trans-radial is rapidly moving toward the approach of choice,” Sura said, although he cautioned that for some patients “it may not a good idea.”

Specific benefits of the trans-radial approach include:
• Lower rate of blood transfusions and a lower mortality rate compared to the femoral approach.
• Increased patient safety with less bleeding complications, hematomas, and possible nerve trauma.
• Increased patient comfort since patients may sit up, stand and walk immediately after the procedure rather than having to lie flat for four to six hours with the femoral approach.
• Lower complication rates, which equate to increased patient satisfaction and even cost-savings as complications can be expensive.
“As long as it is appropriate for you, it’s absolutely the way to go,” Sura said.