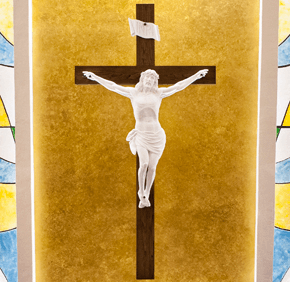 By George P. Matysek Jr.
gmatysek@CatholicReview.org
Twitter: @ReviewMatysek
When Monsignor Michael Schleupner first saw the commanding 14-foot crucifix that now hangs in the sanctuary of St. Margaret in Bel Air, he was spiritually moved.
“It’s absolutely striking,” said the pastor of one of the largest parishes in the Archdiocese of Baltimore. “It’s magnificent. What it has accomplished in this building is wonderful.”
The new crucifix is the centerpiece of a recently completed $1.4 million renovation of the Harford County church. The vast majority of the funds were designated for long-overdue improvements to infrastructure in the 45-year-old church: a new roof, new air conditioning and heating systems and five new doors etched with liturgical symbols such as wheat and grapes.
In addition to the crucifix, other liturgical enhancements included reopening a stained glass skylight window in the baptistery and refinishing a wall behind the sanctuary from floor to ceiling in faux gold leaf. Resin mimicking stained glass was applied to two side panels. A forged metal crucifix and metal lamps were also introduced in the confessional.
The sanctuary crucifix includes a wooden cross and a seven-foot white corpus of Christ crafted by an artist in South America. Christ’s eyes are open, and his head is lifted.

“It’s the moment of Christ saying, ‘My God, my God, why have you forsaken me?’” Father Schleupner said, “or maybe the moment he says, ‘Father, into your hands I commend my spirit.’”
Kathy Christ, a member of the five-member art committee that assisted in planning the renovation, said her group had spent months working with the artist to ensure the Christ figure was precisely what committee members had in mind.
“We were very picky,” she said. “We wanted him to be looking up to the heavens to the Father.”
A contemporary image of the risen Christ, which was part of St. Margaret’s original design, was relocated to the back of the church, suspended from the ceiling in front of the organ pipes. Monsignor Schleupner said there is rich symbolism in having a crucifix in the sanctuary and a risen Christ figure prominently displayed as people exit the church.
“During Mass, we offer the sacrifice of Jesus on Calvary,” he said. “Then, as we leave church, we are reminded of the living Christ we received in the Eucharist.”
Monsignor Schleupner noted that the input of parishioners was sought before changes were made in the sanctuary.
“We heard from the people that they wanted more light, more color and more spiritual imagery in the church,” he said. “We’ve brought in a lot more color and new lighting that the church lacked.”
Weekend Masses were celebrated in the parish hall while construction was underway from June 9 until mid-September, with weekday Masses celebrated in the adult education center and funerals offered at St. Mary Magdalen, a mission church of St. Margaret. Parishioners returned to the refurbished church the weekend of Sept. 20-21.
The renovation project is being funded with $420,000 from parish reserves, $420,000 in money raised in the parish’s participating in the archdiocesan Embracing the Mission-Shaping Our Future capital campaign and $550,000 from a bank line of credit.
The parish hopes to pursue additional church improvements in a second phase of renovations in the future, the pastor said.
Archbishop William E. Lori will bless the crucifix Oct. 12 during the 9 a.m. Mass.
Also see: Parish date night part of ‘intentional support’ marriages need, leaders say
Parkville mom makes big strides in raising money for people with autism
PrevNext