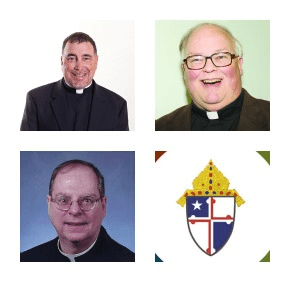 The June 25 clergy announcements from Archbishop William E. Lori include three new pastors for parishes in the Archdiocese of Baltimore.

Their profiles that follow were compiled using information supplied by the Office of Clergy Personnel.

Father Lesnick begins his new assignment July 1 as pastor of St. Joseph in  Taneytown.
A native Baltimorean, Father Lesnick was ordained in 1978 after preparing for  the priesthood at St. Mary’s Seminary and University in Roland Park and Mount  St. Mary’s Seminary in Emmitsburg.
Father Lesnick, 65, served as associate pastor of St. William of York, Ten Hills,  1978-80; St. Michael, Frostburg, 1980-81; St. Rose of Lima, Brooklyn, 1981-83;  St. John the Evangelist, Severna Park, 1983-86; St. Clement Mary Hofbauer,  Rosedale, 1986-87; Our Lady of Hope, Dundalk, 1987-92; and St. Michael the  Archangel, Overlea, 1992-98.
Father Lesnick served as chaplain of The Neighborhoods at St. Elizabeth  Rehabilitation and Nursing Center from 1998 to 2005. After a sabbatical, he served in special ministry at St. Augustine in Williamsport from March until July 2006. He then served as administrator and pastor of St. Peter in Hancock until 2009.
After a discernment sabbatical, Father Lesnick returned to special ministry, first at St. Timothy in Walkersville and then at St. Patrick in Cumberland, both in 2010. He then served as chaplain at Frederick Memorial Hospital while also serving at the St. Anthony Shrine at Our Lady of Mount Carmel in Thurmont until 2013.
From 2013 to 2015, Father Lesnick served as associate pastor of St. John in Westminster and as an area health minister.
Father John B. Ward

On July 1, Father Ward begins his new assignment as pastor of St. Francis de  Sales in Abingdon.
Born in New Orleans, Father Ward, 63, was ordained in 1986 after preparing for  the priesthood at St. Mary’s Seminary and University.
Father Ward served as associate pastor of St. Mark in Catonsville from 1986 to  1987 and of the Cathedral of Mary Our Queen in Homeland from 1987 to 1990.

He then continued his studies at The Catholic University of America in  Washington, D.C., until 1992.

From 1992 to 1996, Father Ward served as a judge for the archdiocesan  marriage tribunal, and then as priest secretary to Cardinal William H. Keeler until  1999.
He served as pastor of Our Lady of Hope in Dundalk from 1999 to 2010. In 2010, he was named pastor of Prince of Peace in Edgewood and adjutant judicial vicar of the archdiocesan marriage tribunal.
Father Samuel V. Young

Father Young, 53, begins his new assignment July 1 as pastor of St. Paul in  Ellicott City.
A native of Baltimore, Father Young was ordained in 1990 after serving as a  summer seminarian at St. Elizabeth of Hungary in Highlandtown, St. Joseph on  Carrollton Manor in Buckeystown, and St. Joseph in Cockeysville.
As a seminarian, he also served at Our Lady of Mount Carmel in Essex from  1987 to 1988, and interned at St. Andrew by the Bay in Annapolis from 1998  until 1990.
After his ordination, Father Young served as associate pastor of St. Margaret,  Bel Air, 1990-92; Our Lady of Hope, Dundalk, 1992-97; and Holy Trinity, Glen  Burnie, 1997-2000.
He served as temporary administrator at St. Clare in Essex and St. Joan of Arc in Aberdeen, respectively, both in 2000. He then served as pastor of St. Joan of Arc until 2010, when he became pastor of Our Lady of Grace in Parkton.