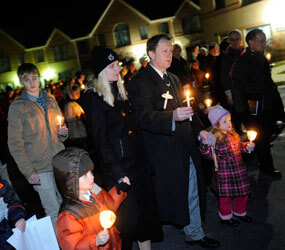 Under a full moon on a cold, dark evening, they walked and prayed together, an estimated crowd of 600 people, holding candles and praying the rosary as they marched Dec. 10 from Mother Seton Church in Germantown to a nearby late-term abortion clinic.

Helping to lead the candlelight prayer procession was Washington Cardinal Donald Wuerl, just after he presided at a Mass for Life at Mother Seton Church, marking one year since the arrival of late-term abortionist Dr. LeRoy Carhart in the neighborhood. A standing-room crowd of more than 1,000 people attended the Mass, where Cardinal Wuerl said, “Countless unborn infants are reaching out to hold on to us with all of their strength, since we are the only voice they have in their struggle to find a place, a home, a life in this world.”

The prayer procession wound for several blocks, with the flickering points of candlelight shining in the darkness, held by people of all ages, ranging from senior citizens to small children, who marched four people abreast on the sidewalk, as cars drove by. Members of a Knights of Columbus honor guard also marched near the front of the procession. Two seminarians held a large banner that read, “Pray to end abortion.”

The marchers then stood and prayed before the abortion clinic, and Cardinal Wuerl said, “Let us ask God’s blessing on all of us, all who are gathered here, all who speak for life, who walk for life, who defend life.”

Moments later, the cardinal said he was inspired by the large crowd of people who witnessed to life at the Mass and procession. “It says that the future is with life. Our task is to keep holding up the Gospel of Life.”

Christa Lopicollo, the executive director of Life Issues for the Archdiocese of Washington, also praised the witness of the great numbers of people who stood and prayed for life at the Mass and marched together in the candlelight procession. “The power of the symbolism of the light (shining) in darkness was beautiful,” she said.

In his homily, Cardinal Wuerl encouraged people to continue to witness to the dignity of all human life through their prayers and actions. “Prayer does change hearts … Prayer does work, and it must be our instrument of change,” the cardinal said.

Cardinal Wuerl noted that just as St. John the Baptist was a voice crying out in the wilderness to prepare the way of the Lord, so too has the Catholic Church in the past 20 centuries continued that mission, to be that voice, and to follow Jesus’ call for his disciples to be his witnesses. “What brings us here is the recognition we’re called to share our faith, to share what we believe. We’re called to proclaim the Gospel of Life proclaimed by Jesus.”

The cardinal called abortion “the single greatest blight on our nation since the age of slavery. How is it possible in history for atrocities to take place, for those things to happen? How could it be there were concentration camps dedicated to the extermination of people? How could we have in our nation slavery – the reduction of people to property?”

Then, the cardinal continued, people could ask how it is possible today to have “the wholesale destruction of human life” through abortion.

“How did such atrocities come to be ever accepted by any people, anywhere, at any time? Silence. Silence is the ally of atrocity,” Cardinal Wuerl said.

Today, the cardinal continued, “We are confronted with the evil of abortion on demand. It’s almost inconceivable in our city, in our society (that) it would be legal to kill an almost fully formed child.”

After Nebraska passed legislation to prohibit abortions after 20 weeks after conception, Dr. Carhart set up a late-term abortion practice in Germantown, in Maryland which has some of the least restrictive abortion laws in the country. Since his arrival last December, Dr. Carhart has performed an estimated 700 abortions at the Germantown clinic.

In his homily, Cardinal Wuerl said that “taking life in the womb” can never be justified. He said it was important to reach out in compassion to mothers and fathers contemplating abortion or grieving afterward. And he called on people to stand up for unborn children whose lives are at risk. “We’re the ones who can speak for the child yet to be born, for the child not yet able to say his or her first words.”

The cardinal told the story of visiting a mission in another country some years ago, where he held a newborn child who “held on with all his strength to my finger,” as if not to let go.

“Countless unborn babies are reaching out to hold onto us with all of their strength, since we are the only voice they have in the struggle to find a place, a home, a life in this world,” Cardinal Wuerl said.

Cardinal Wuerl noted the spiraling violence in homes and on streets throughout the country. “If it’s ever going to be broken, we need a new vision. Christ invites us to see that way that recognizes the gift of life, the wonder of life. Truly you and I are capable of life-giving compassion … (and) life-giving support for mothers and children.”

Calling on people to be witnesses for life, through their prayers and actions, the cardinal said, “Life is God’s good gift to you and me. It’s God’s gift to all of us,” who are called to “see with the eyes of faith, the eyes of compassion, the eyes of love.”

Seven priests concelebrated the Mass. After the homily and the Creed, prayers were offered for the unborn, for the elderly and for people with disabilities, that people might recognize “their right to life as children of a loving God.”

After Communion, Father Carlos Benitez, the pastor of Mother Seton Parish, thanked people for coming to the Mass and praying in the candlelight procession, and he invited people to come to the weekly prayer vigils near the abortion clinic from 8-10 a.m. every Monday at Executive Park Circle and Wisteria Drive.

Dr. Grace Morrison, a parishioner of St. John Neumann in Gaithersburg who has helped coordinate the Monday morning prayer vigils outside the abortion clinic for the past year, said the participation of the cardinal and the great crowd of people at the Mass for Life and rosary procession offered them great encouragement and support to continue their efforts. “As he (the cardinal) said, ‘We need to give these babies a voice.’”

She noted that in the past year, there have been “18 saves we know of,” of women who changed their minds and left the abortion clinic without undergoing the procedure. “In order to close this place down, our faithfulness out there is essential … I believe it is our prayer, our fasting and our sacrifice that is what it will take to pierce the darkness,” she said.

As the candlelight procession wound its way back to the church, the last group of marchers included Pete Holter, who carried his 1-year-old son and guided his other three little boys, ages 6,4 and 3, along the sidewalk. Holter, whose wife was unable to join the march, attends St. Mary Parish in Hagerstown with his family. When he heard about the candlelight prayer vigil, “I thought I’ve got to get the boys out here,” and they made the one-hour drive to the Mass and procession.

Holter, who works as a quality analyst for a highway construction company, said, “We wanted to witness for Jesus” and pray for life, for the unborn children and their mothers.

“Everything is depending on our prayers,” said the father, as he carefully shepherded his young sons on the path back to the church.

Their prayers, he said, were especially directed toward the mothers who are drawn to that clinic. “We’re praying for them,” he said. “We want them to know we love them, and we are praying for their babies.”